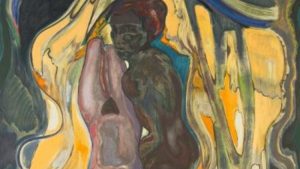 This first solo show of Michael Armitage (1984) in Italy includes existing works along with new paintings, produced specifically for the occasion.

Armitage, born in Nairobi, elaborates upon the contradictory dynamics in contemporary Kenya. Through his painterly language, the artist filters the various spheres that mark both the collective and individual experience in his country of origin — from brief scenes of daily life to local protests, from the manifold manifestations of popular culture to its sociopolitical implications. Armitage uses processes of abstraction in order to challenge the myths and the singular narrative surrounding Africa, deconstructing and exposing its limits and taboos. In his paintings, personal memory and firsthand experience in Kenya are combined with the urgent realities depicted by the media, creating an imaginary made of violence and social unrest, but also one of hope.

The paintings of Armitage develop a system of references to art history, from rock art and Egyptian hieroglyphs to Tiziano, Goya, Velazquez and Manet, arriving at a close relationship with Peter Doig and— particularly evident in the works exhibited in “The Promised Land” — Jacob Lawrence and Jack Katarikawe. The artist appropriates Gauguin’s vision of the “exotic”, subverting the Western gaze, and thus invites the viewer who may be attracted to the seductive style of his paintings to problematize their implied colonialist attitude. Looking towards the canvas as a place to locate the subject within east Africa, as well as a possible space of emancipation from the European canon, the artist chooses to paint upon the unusual material of Lubugo, a traditional bark cloth from Uganda, once used for funeral rites and now sold in tourist markets in the form of souvenirs.

“The Promised Land” brings together a series of works created between 2014 and 2019, in which real and fictitious events linked to Kenya are layered in surreal atmospheres. The new production of works build upon The Fourth Estate (2017), which portrays opposition political rallies before the August 2017 elections in Kenya. Inspired by these huge gatherings, the new works unveil the body politic at work by presenting its various incarnations; his paintings depict the construction of the collective, tracing the propaganda apparatus to moments of consensus to episodes of violence. His previous works show scenes of life from East Africa, in some cases elevating the subjects to grotesque figures that represent paradigms deemed unpalatable for civil society, such as the intimate homoeroticism of Kampala Suburb (2014) or the sexual tourism captured by Mangroves Dip (2015).
Upon conclusion, the exhibition will travel to the Museum of Contemporary Art Australia in Sydney.

Michael Armitage studied at the Slade School of Fine Art and the Royal Academy of Arts in London. He lives and works between Nairobi and London.

Fondazione Sandretto Re Rebaudengo, Via Modane, 16, 10141 Turin TO | Italy