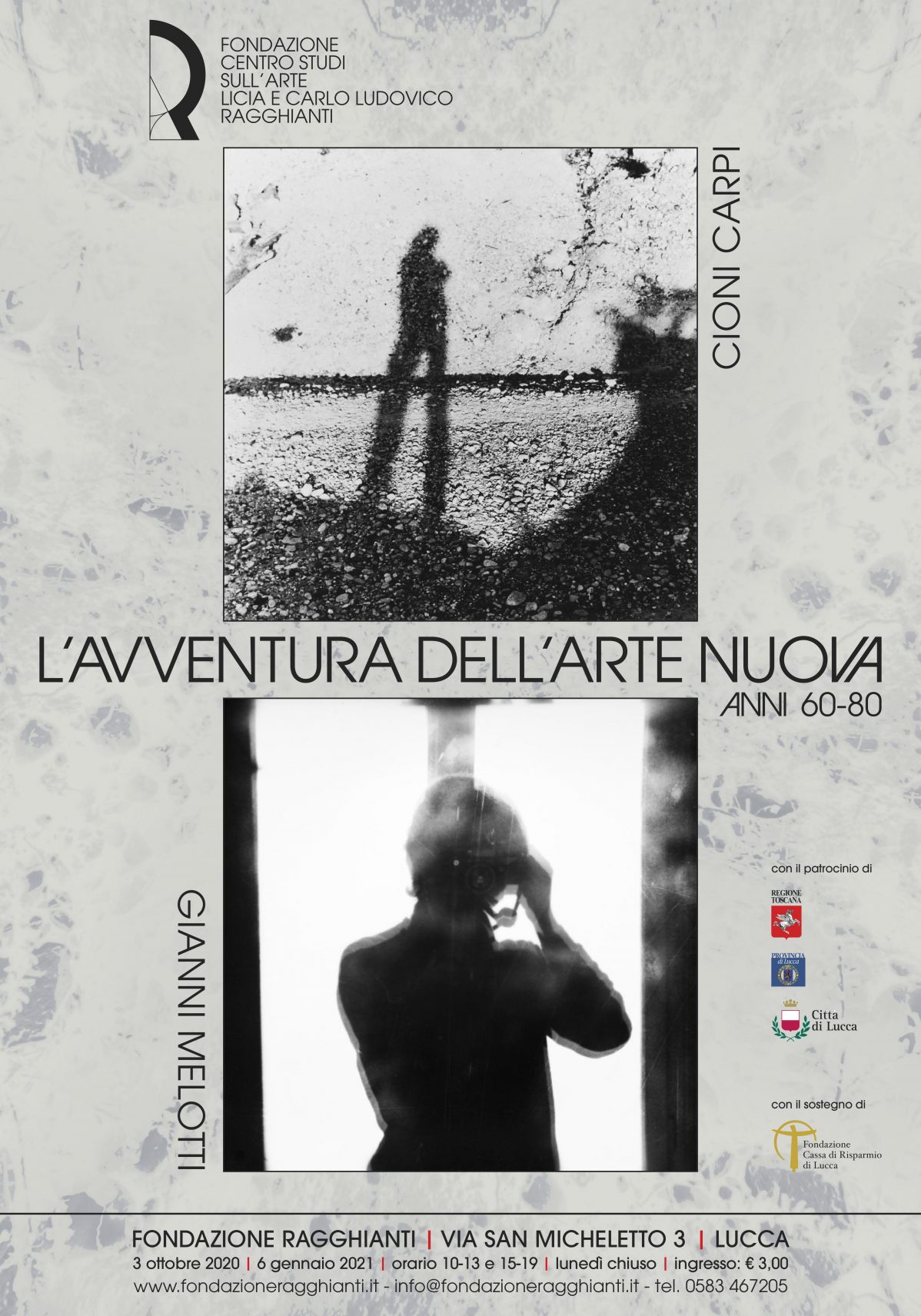 The Fondazione Ragghianti presents two contemporary exhibitions, which intend to investigate the great ferment in the Italian art of the sixties, seventies and eighties, rediscovering the figures of Cioni Carpi and Gianni Melotti, versatile and very active artists respectively in Milan and Florence.

The first exhibition, curated by Angela Madesani, is dedicated to the artistic experiments of Cioni Carpi, byname of Eugenio Carpi de’ Resmini (Milan, 1923-2011), a complex and multifaceted character. Son of Aldo Carpi, painter and historical director of the Accademia di Brera, brother of Fiorenzo, famous musician, and of Pinin, writer and illustrator for children, Cioni begins devoting himself to painting in the fifties in Paris. He moves to Haiti, then to New York and then to Canada, where he lives until the middle of the sixties when he moves permanently to Milan. In the United States he meets Maya Deren, American film director of Ukrainian origin, who pushes him toward the experimental cinema, a field in which Cioni Carpi will excel. From 1959 to 1980 he realizes several art films, currently housed in many important archives, among which the MoMA in New York. Cinema and also theatre for Carpi, as painting had previously been, represent an experimental ground. His is the first scenography made of a movie for L’istruttoria (The investigation) by Peter Weiss at the Piccolo in Milan in 1966, shot in the concentration camp where his brother Paolo had been killed. Between the end of the sixties and the seventies, Carpi works with some composers, such as Angelo Paccagnini, Giacomo Manzoni and Bruno Maderna, for whom, he realizes films and projections on the occasion of the staging of their works. Carpi’s films has been restored in 2002 by the Cineteca di Milano, to which they now belong and have been the subject of a publication by Il Castoro. Carpi, the only Italian artist, together with Franco Vaccari, to join the group of the Narrative Art, also used photography, installations, light projections, video for his research. In 1978 and 1980 he took part in La Biennale in Venice in two exhibitions curated by Vittorio Fagone, with whom he had developed a relationship of esteem and cooperation over the years.

The exhibition at the Fondazione Ragghianti includes the artistic path of Carpi from 1960 to the eighties. About forty large works are exhibited, including paintings, installations, photographic works, films, drawings, projects and books created by the artist in a single copy. But also documents and catalogues on the work of this smart protagonist of the art of the second half of the twentieth century.

Of particular importance are the nine works owned the Collection Panza di Biumo: texts and photographs on paper such as the four Trasfigurazioni/Sparizioni (Transfigurations/ Disappearances) (1966-1974) and Abbiamo creato atipici sistemi (We created atypical systems) (1963-1974); Seshspass 01 (Sequoia semper virens) (1976) and Palinsesto 2 (Palimpsest 2) (1963), works on paper for the composition of which Carpi used different materials. But also a series of beautiful photographs and compositions of images and drawings from private collections that fully make the multifaceted poetic and intellectual stature of the artist, often performer of his own work with surreal titles such as those made between 1963 and 1976: Me ne tornavo ai luoghi sfatti della memoria (I came back to the unmade places of memory), Lasciatemi vedere una cellula viva del vostro cervello (Let me see a living cell of your brain), where Carpi portrays himself as a clown, given his history as actor and mime (he studied with Jacques Lecoq) and Cadendo mi spezzai le braccia e le gambe mentre saltavo di palo in frasca (Falling down I broke my arms and legs while jumping from pole to branch); or also the paintings on canvas of the eighties such as Pontypridd con stanza rossa (Pontypridd with red room), part of the cycle Le città distanti (The distant cities), complex spatial utopias; Blue painting 3 Palinsesto (Palimpsest) 10 and Blue painting 5 Palinsesto (Palimpsest) 12 (1973), geometric shapes emerging from previous paintings. Among the exhibited works, the jute stripes on which photographs printed on paper or on fabric and drawings are applied, which propose the concept of tapestry in a contemporary key. Here too there are long writings explaining the work: Va, gira, guarda (Go, turn, see) (1979) and Ga.ga-gak, the sound of the international language of chickens which means “Attention – danger!”.

The second exhibition, curated by Paolo Emilio Antognoli, presents the results of a historical and archival research, still unpublished, concerning the work of Gianni Melotti (Florence, 1953) in his first decade of activity, from 1974 to 1984, both in his historical-artistic development, and in the relationships he had with some artists bound by friendship and collaboration, such as Lanfranco Baldi, Luciano Bartolini, Giuseppe Chiari, Mario Mariotti and other artists such as Bill Viola related to his experience in art/tapes/22, the studio dedicated to the production of videotapes for artists of which Melotti becomes the photographer in 1974. A large collection of these photographs is now kept at ASAC of La Biennale in Venice.

The exhibition aims to document the development of the first decade of Melotti’s artistic activity, from the experimentations cameraless (without the use of photo camera) in black and white to his colourful three-dimensional works, realized with cibachrome materials on decorated fabrics.

It is around these spaces that a new artistic and cultural circuit develops, with the birth of a general climate, positive for experimentation, and not only for the entire region. An environment prone to interaction between the most different artistic and cultural activities: architecture and radical design, publishing, artist film, video, contemporary music and the new artistic off-media such as record, artist book, multiple.

And Gianni Melotti was undoubtedly one of its protagonists, through his conceptual language with original and transgressive results.

About thirty works by Gianni Melotti are exhibited at the Fondazione Ragghianti. Among the most emblematic of the exhibition path: 9,30/10,30, first work in 1975; Giallo (Yellow) (1979), site-specific installation with photographs and texts set in a Genoese parking; Gli angoli della Biennale (The corners of La Biennale) (1976), a series of photographs dedicated to Pier Luigi Tazzi referred to the Corners Portraits by Irving Penn; Come as you are / Jacket and necktie (1981), photos and super8 film in loop on the theme of the couple’s relationship; the slideshow Uovo fritto (Fried egg) (1980) for the Florentine square of Santo Spirito; Ritratti nella rete (Portraits in the net) (1982), a series of Polaroids that Melotti snaps to his friends masked with a fishnet stocking, in which he frightens the network as art before the advent of personal computer; the series of five photos Foto fluida (Fluid photo) (1983); Pelle/Pellicola (Skin/Film) (1987-1989), three works in transparent silicon, on the relationship between the work and the frame.

Cioni Carpi and Gianni Melotti: two different artists, united by a happy creativity, with multiform works realized with different materials that well identify the movement of experimentation of the Italian art between the sixties and the eighties of the century, in a multifaceted and amazing path.