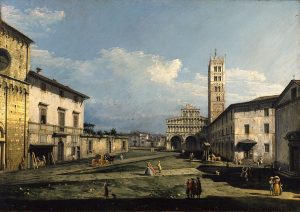 The autumn exhibition of the Fondazione Ragghianti in Lucca, dedicated to the lofty Venetian painter Bernardo Bellotto (1722-1780), nephew of Canaletto, is at the same time a great exhibition event and a study exhibition. It represents a unique opportunity to admire some precious and rare works never seen together, including the most important painting in history having as its subject the city of Lucca, Bellotto’s masterpiece, and five of his drawings, always on Lucca, extraordinarily lent by the British Library. A new significant aim for the institution directed by Paolo Bolpagni and chaired by Alberto Fontana, which is offering an increasingly rich and original programme in the Italian panorama.

The exhibition, realized with the support of the Fondazione Cassa di Risparmio di Lucca and the Banco BPM as main partner, aims to illustrate the journey of Bernardo Bellotto to Tuscany, one of the most charming themes of the Venetian urban landscape painting (vedutismo) in the eighteenth century. The artist had his own training in the Canaletto’s workshop when the latter was at the height of his fame, at the end of the thirties of the eighteenth century. Bellotto absorbed patterns and compositional techniques from his uncle with such an ability of emulation as to deceive his contemporaries themselves. The legacy of the master is the basis of all his work, but as soon as the young Bellotto began to travel outside Venice – and his stay in Tuscany represents his first and fundamental journey –, he developed his own expressive style in an original way, emphasizing the perspective rigor and the realism of the representation.

The most recent archival researches have made possible to date this journey of Bellotto to 1740, two years earlier than previously thought, thus highlighting its importance as a manifesto of the artistic earliness of the painter, then eighteen years old. The rediscovered documentation allows us to see him as a pioneer of the urban landscape painting in Florence and in Lucca, at the service of Tuscan aristocracy.

Focus of this exhibition, curated by Bożena Anna Kowalczyk, one of the main scholar of Canaletto and Bellotto, is the core of city views of Lucca, with the painting representing the Piazza San Martino from the York City Art Gallery and the five drawings of several places around the cathedral and the church of Santa Maria Forisportam, exceptionally granted by the British Library. This group of works, never exhibited together (the drawings, glued on an early nineteenth century album previously owned by King Geoge III and then George IV, will be exposed for the first time unglued), provide an extraordinary documentation of the city of Lucca during the eighteenth century.