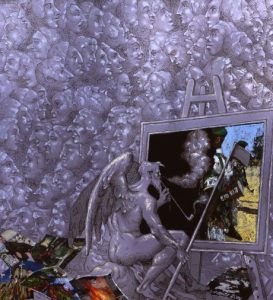 Curated by Francesco Bonami, this is a Collateral Event of the 58th International Art Exhibition of La Biennale di Venezia and the first major exhibition of the late artist’s work in an Italian institution.

While this exhibition is not a retrospective, it will be the first to uniquely address Immendorff’s inquiry into the artist’s identity and his participation within his own paintings.

The artist’s presence inside his own work should not be seen as a classical self-portrait, but more as a participation in the collective atmosphere built within the canvas. Immendorff’s art is a deep reflection on the role of the artist in an age of collective and political commitment, du ring a time when the artist as an individual was seen as a symbol of bourgeois conservative attitude.

During his studies at the Kunstakademie Düsseldorf, Immendorff was the model student of Joseph Beuys; Immendorff is represented here as the rebellious child who, with painting, challenged the ideology of his own teacher.

This exhibition will also be the first to focus on Immendorff’s struggle to elaborate on and overcome his Oedipus Complex through painting, and his use of art as a tool for self-analysis and emancipation.

The  public will have a rare opportunity to experience the work of one of the most controversial figures in the panorama of contemporary painting.

Jörg Immendorff (1945-2007) was one of the most important artists to emerge from post-war Germany. His work has been exhibited internationally since the mid-1960s. He participated in documenta V in 1972, documenta VII in 1982, and was included in the Biennale Arte in 1976. Other important exhibitions include Museum Boymans-van Beuningen, Rotterdam; Kunstmuseum Bonn; Kunsthalle Düsseldorf; Neue Nationalgalerie, Berlin; and Van Abbemuseum, Eindhoven, among many others. Most recently, the major retrospective Jörg Immendorff: For All Beloved in the World opened at Haus der Kunst, Munich and will travel to Museo Reina Sofía, Madrid later this year. Immendorff lived and worked in Düsseldorf and Hamburg until his death in 2007.