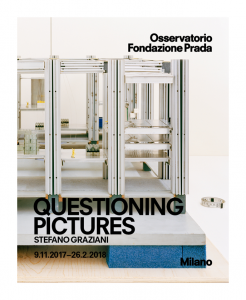 Stefano Graziani investigates archival and conservation systems in museums like the Canadian Centre for Architecture (CCA) in Montreal, Canada; Sir John Soane’s Museum in London, UK; the Kunstmuseum Basel, Switzerland; Museum Insel Hombroich in Neuss, Germany; the Museo di Castelvecchio in Verona, Italy; and the Plaster Cast Gallery at Museo Canova in Possagno, Italy, focusing on the ambivalent relationship between photography and the museum object. Photography navigates an ambiguous territory in Graziani’s work: on one hand he documents diverse materials like drawings and architectural models, books, photographs and paintings; on the other, he embarks on an interpretative path through the careful use of light and camera angles, as well as the inclusion of disturbing elements in his shots. His photographs not only shed light on museum collections and archives usually denied to visitors, but reactivate them according to entirely subjective logic and perspectives. As Francesco Zanot emphasizes, “Questioning Pictures” is a sort of crash test designed to assess the museum’s ability to resist external attacks and increase its permeability in proportion. Graziani transforms the invisible into something visible, preventing these terms from being subsequently reversed, and thus sheds light on one of the primary mechanisms through which museums generate and control their power. The regulations that museums impose on reproducing materials in their collections fulfill the same role. Graziani systematically evades them, carrying out an act of civil disobedience by adopting an ethical and formal rigor reminiscent of the photographs of Walker Evans and Lewis Baltz.” As Okwui Enwezor maintains, Graziani is tackling an indisputable fact “because the camera is literally an archiving machine, every photograph… is a priori an archival object.” And Graziani is building an anti-archive. The exhibition set up was designed by studio OFFICE Kersten Geers David Van Severen as a system of colorful, modular screens laid out across the two levels of the Osservatorio, creating unexpected visual and semantic combinations between the photographs and the objects represented. A model of a building by Aldo Rossi is connected to a drawing by Gordon Matta-Clark; a late nineteenth-century photo album of Pompeii is set alongside a plastic model of the Pantheon on display at Sir John Soane’s Museum in London; a plaster by Antonio Canova conserved in Possagno dialogues with Lucas Cranach’s Three Graces.

(on display at the Kunstmuseum Basel, Switzerland); the maquette for a utopian project by Cedric Price is associated with a table prototype designed by Mies van der Rohe. This heterogeneous collection of objects and artworks is united through Graziani’s thinking, as the artist transforms them into disorienting and unexpected still lifes. As Zanot notes, they are “enigmatic, just like the nature of the photograph, which here becomes unmistakable: it is a non-document document.” In this project photography functions as a conveyer belt, collector and transmission vehicle that can reconnect and combine works that are far apart in space and time, and that are often impossible to physically transfer from one place to another. It also operates as a tool that – through subtle deviations, minimal alterations and personal interpretation – unhinges traditional archival and cataloguing systems in order to grant new visibility, and therefore new life, to the documents, materials and artworks conserved in museum collections. Graziani injects “visual and interpretative viruses” into these archives, accomplishing a feat of “hacking” that triggers a potentially infinite chain of new analyses and enigmas.

Curated by Francesco Zanot, the exhibition includes a new body of works commissioned by Fondazione Prada that explores photography as a tool for narration, cataloguing and reinterpretation.