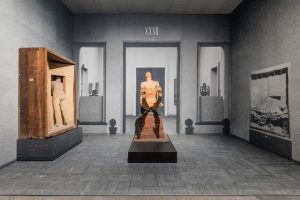 Curated by Germano Celant, the exhibition explores the world of art and culture in Italy in the interwar years. Based on documentary and photographic evidence of the time, it reconstructs the spatial, temporal, social and political contexts in which the works of art were created and exhibited, and the way in which they were interpreted and received by the public of the time.

Between 1918 and 1943 Italy was marked by the crisis of the liberal state and the establishment of fascism, and by the ongoing interdependence of artistic research, social dynamics and political activity. As emphasized by Jacques Rancière in his book Le partage du sensible. Esthétique et politique (The Politics of Aesthetics. The Distribution of the Sensible) (2000), art never exists in abstraction, but comes into being and takes shape within a given historic and cultural context. From this point of view, political and aesthetic aspects are interwoven. Taking this hypothesis as a starting point, the documents and photographs that prompted the selection of works in the exhibition offer a record of the artistic and cultural production of the period, taking into account the multifaceted contexts and settings in which it was exhibited: these include artists’ studios, private collections, large public events and exhibitions of Italian art both in Italy and abroad, architectural designs and city planning, graphic arts and the first examples of industrial furniture production. According to Germano Celant, the documentation found and presented in this exhibition “offers a summary of the communicative function of a work of art, and tells a real story that lies outside of the theoretical discourse of an artifact.” As “means of cultural understanding”, an expression coined by David Summers, “they ensure that an art object has a particular territory, that of appearing to a broader audience, in given social and political situations.”

The investigation was carried out in partnership with archives, foundations, museums, libraries and private collections and has resulted in the selection of more than 500 paintings, sculptures, drawings, photographs, posters, pieces of furniture, and architectural plans and models created by over 100 authors. In “Post Zang Tumb Tuuum. Art Life Politics: Italia 1918–1943,” these objects are displayed with period images, original publications, letters, magazines, press clippings, and private photographs in order to raise the issue of the decontextualization within any standard exhibition presentations, in which a work of art traditionally becomes a neutral, isolated object. If, on the other hand, the material and physical conditions of its original presentation are recreated, the opportunity is given not only to explore the complex relations between creators, gallerists, art critics, ideologues, politicians, collectors, patrons and viewers, but also to investigate the concept of the exhibition in its different forms, as a quintessential element in the range of the symbolic forms of the period. Furthermore, this approach underlines how the exhibition of national products and images—even in international settings—was used by the fascist regime as a flexible, adaptable, modern and practical means to reshape Italian people and mold their experience of the world.

The exhibition design, conceived by New York studio 2×4 in conjunction with the curator, provides an immersive experience consisting of twenty partial reconstructions of public and private exhibition rooms. These full-size recreations from period photographs contain original works by artists such as Giacomo Balla, Carlo Carrà, Felice Casorati, Giorgio de Chirico, Fortunato Depero, Filippo de Pisis, Arturo Martini, Fausto Melotti, Giorgio Morandi, Scipione, Gino Severini, Mario Sironi, Arturo Tosi, and Adolfo Wildt, among others. This presentation renews the reciprocal relationship between an artistic expression and its context, the latter in the form of furnishings, architectural elements, decoration and manners of display, so as to offer a deeper understanding of the exhibited works and their creators, and to provide a more detailed interpretation of Italian art history. This way, the dialectics are revisited between individual creators and representatives of movements, groups and tendencies like Futurism, Valori Plastici, Novecento, the Roman School, the so-called Les Italiens de Paris, the abstractionists and Corrente. These movements, with their expressive eclecticism and pluralism, all contributed to the enlivenment of the artistic and cultural scene in Italy marked by the coexistence of the avant-garde with “the return to order”, experimentation with realism, and intimism with propaganda.

Consideration of the contemporary social, political and vital context is provided by the exhibition’s presentation of architectural plans, urban planning and large official expositions like the Mostra della Rivoluzione fascista (1932), the Esposizione dell’Aeronautica Italiana (1934), the Mostra Nazionale dello Sport (1935) and the major design for the E42 project. The exhibition’s presentation is punctuated by thematic focuses dedicated to politicians, intellectuals, writers and thinkers (like Giuseppe Bottai, Piero Gobetti, Antonio Gramsci, Carlo Levi, Alberto Moravia, Luigi Pirandello, Margherita Sarfatti and Lionello Venturi) that developed their own autonomy by actively participating in or remaining indifferent to the regime’s recommendations, or, in contrast, being subjected to or criticizing the impositions it meted out in the political, cultural and artistic domains.