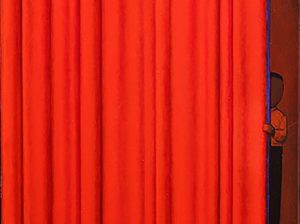 A solo show by Chinese painter Liu Ye curated by Udo Kittelmann. Following the first iteration held in 2018 at Prada Rong Zhai in Shanghai, the exhibition travels to Milan for a new presentation, featuring a selection of 35 paintings realized from 1992 onwards.

Liu Ye expresses an intimate and sensual imagination, that feeds on heterogeneous sources related to literature, history of art and popular culture from the Western and Eastern world, giving rise to atmospheres which evoke introspection, purity and suspension. In the artist’s body of works the stylistic features of fairy-tales coexist with a sense of humor and a parodic vein. Referring to his own artistic production, Liu Ye underlined that “every work is my selfportrait”.

In Shanghai Liu Ye’s works related harmoniously with the 1918 historical residence’s original furnishings, decorations and colours, creating a symbiotic relationship with the intimate spaces and small rooms of Prada Rong Zhai. In Milan the paintings will generate a chromatic and material contrast with the concrete walls and the industrial environment of Fondazione Prada’s venue, in order to activate a new narrative sequence and an enigmatic contrast with these large exhibition spaces. The geographical dislocation will contribute to focus on the ability of Liu Ye to create a personal pictorial universe, which does not align with any particular artistic movement.

Combining different elements and sources, his paintings are generated by a plurality of creative forces: memory, observation, imagination and artistic education. All his works are pervaded by a certain ambiguity as they seem suspended between two worlds: reality and invention. During his career he created a personal domain, at the same time accessible and impenetrable to others, which can be described as a subjective reality. He employed his art as a mean of self-exploration and discovery, in a context in which artistic creation and daily life mutually influenced each other. As he specified, “Even though I have never become an abstract artist, I am nonetheless interested in stripping down narrative and simplifying.”

As Udo Kittelmann highlights, “I experienced his paintings as sensitive pictorial messages relayed between two worlds that are often viewed as contradictory: Western cultures versus Asian cultures. Even back then, Liu Ye’s paintings struck me as manifesting a dialectical constellation, for his work is not only interwoven in many ways with China’s manifold cultural developments; it also bears witness to a profound knowledge of the history of European culture and painting.”