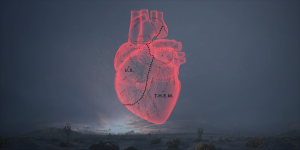 This virtual reality installation, produced by Legendary Entertainment and Fondazione Prada, will be presented in its extensive full version in Milan after its world premiere in the 70th Festival de Cannes.

Based on true accounts, the superficial lines between subject and bystander are blurred and bound together, allowing individuals to walk in a vast space and thoroughly live a fragment of the refugees’ personal journeys. “CARNE y ARENA” employs the highest, never-before-used virtual technology to create a large, multi-narrative light space with human characters.

The experimental visual installation “CARNE y ARENA” is a six and half minute solo experience that reunites frequent collaborators Alejandro G. Iñárritu and three-time Academy Award®-winning cinematographer Emmanuel Lubezki alongside producer Mary Parent and ILMxLAB.
“During the past four years in which this project has been growing in my mind, I had the privilege of meeting and interviewing many Mexican and Central American refugees. Their life stories haunted me, so I invited some of them to collaborate with me in the project,” said four-time Academy Award-winner Iñárritu. “My intention was to experiment with VR technology to explore the human condition in an attempt to break the dictatorship of the frame, within which things are just observed, and claim the space to allow the visitor to go through a direct experience walking in the immigrants’ feet, under their skin, and into their hearts.”

As stated by Germano Celant, Fondazione Prada’s Artistic and Scientific Superintendent, “with ‘CARNE y ARENA’, Iñárritu turns the exchange between vision and experience into a process of osmosis in which the duality between the organic body and the artificial body is dissolved. A fusion of identities arises: a psychophysical unity in which, by crossing the threshold of the virtual, the human strays into the imaginary and vice versa. It is a revolution in communication in which seeing is transformed into feeling and into a physical engagement with cinema: a transition from the screen to the gaze of the human being, with a total immersion of the senses. Iñárritu’s project perfectly embodies Fondazione Prada’s experimental vocation and its long-lasting engagement towards the correlation between cinema, technology and the arts.”

Access to the installation will only be available via online booking.