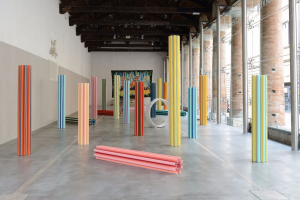 As the title suggests, the exhibition proposes a leap backwards of over thirty thousand years, a time when the first findings of animal parts used as musical instruments date back.

The artist has identified and selected, from the collections of some important natural history museums, findings of animal fossils traceable to the first forms of acoustic instruments: tusks, horns, bones have been scanned and reproduced in ceramic with a 3D printer, to be transformed into sound sculptures. In addition to their formal qualities, these rudimentary instruments, which refer to an archaic and ancestral imagery, maintain their intrinsic function in sound potential.

The installation Neolithic Sunshine, realized in the Church of the Suffrage, is a sound piece composed by the artist and performed by an ensemble of musicians using reproductions of prehistoric instruments. The piece takes its inspiration from the most ancient known musical practices – from seasonal and fertility rituals, to the idea of the world’s creator sound, up to its transformation into words – to elaborate them in a polyphonic composition with a narrative and evocative character.

The piece is distributed in space through an audio system arranged in a circular shape, following the course of the building: from each speaker a single instrument resounds recalling the formal structure of the ritual and placing the listener at the center of the musical installation.

The instruments are placed on a podium in the centre of the twelve-sided hall – as if they had been deposited after a musical performance – surrounded by a structure made of wool threads, entitled Tent vestige. This is a monumental installation and at the same time ephemeral, which with its colored lines defines a meta room capable of connecting interior and exterior: the bundle of wires, in fact, starts from the Liceo Artistico Mengaroni, in front of the Visual Arts Centre Fish, through the square of Creativity and penetrates the Church of Suffrage, creating a sign in the urban context that emphasizes the ideal relationship between the three architectural spaces. 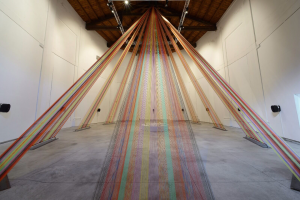 In line with the layout of the Chiesa del Suffragio, the Giardino perduto, the installation that occupies part of the Loggiato della Pescheria, also creates a golden chromatic environment, suggested by the presence of elements full of primordial energy and traceable to the evocative idea of the exhibit. A series of more than twenty sculptures, also made of wool threads, scattered along the nave, refer to the remains of a non-existent architecture, columns that do not support anything, but – as for Tent vestige – refer to a ritual and fantastic space.

As the ideal epicentre of the energy generated by the works on display, Nasini has placed a large ceramic ring in the Loggiato della Pescheria, Ruota, which recalls the archetypal forms of prehistoric architecture and the first tools created by man. Finally, the ideal background to the various episodes of the exhibition is the Wild Principle, a large hand embroidered tapestry: a view, a glimpse, a primitive passage, a lush and wild scenery with vivid and disturbing colors.