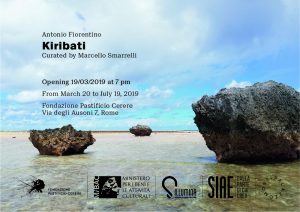 Antonio Fiorentino will display, for the first time, a series of artworks created after hisstay, between July and August 2018, in the Kiribati islands, an insular country in Oceania made up of 33 scattered islands that cover an area ranging from a width of 4000km from East to West, to 2000km from North to South. Kiribati is located on the International Date Line and it is the first country to welcome the new dawn, the new day, the new year: one might almost say that it’s “in the future”. But the future of this land is apocalyptic, for it runs the risk of permanently disappearing over the coming decades (according to the estimates within 30 to 50 years), since the constantly rising sea level caused by global warming is slowly (but steadily) submerging the islands’ territory.

Driven by these powerful estimates, Fiorentino has created a set of artworks that describe his journey in the pursuit of the future, trying to find an answer to an unsolvable enigma, in which we hear the echo, transmuted by a young contemporary artist’s perception, of that one extraordinary Gaugin’s masterpiece,“Where do we come from? Who are we? Where are we going?” (1897-98), considered to be his not only artistic, but spiritual testament.

The timeline, in Kiribati, loses its confines, allowing distortions that managed to let the artist “travel through time”, in a dimension both suspended and undefined, casual, in an incessant allusion with the intent of evaluating a perspective in relation to the chosen direction chosen. Thus, the idea of future loses its traditional connotation, its dualism, either positive or catastrophic, and leaves room to newer and freer interpretations.

On April 15th April 2019, to satisfactorily complete the exhibition’s itinerary, there will be a preview screening of the video titled Kiribati, shot by the artist while on the island. The video will be displayed in Spazio Molini, located in the basements of Pastificio Cerere, recently recovered, following renovation works of the ancient mill belonging to the former pasta factory.