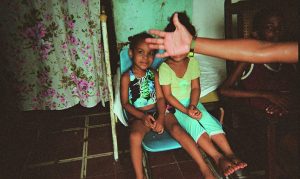 The starting point of the exhibition is a month-long trip to Cuba by Lina Fucà and Daniele Gaglianone with their children in 2016, commissioned by the Fondazione Merz. The visual, personal and collective memory of this experience is interspersed with influences of the city of Turin, where all three artists were born.

The common thread that runs through this set of visual narratives is the reflection around the theme of childhood, understood as a condition common to all human beings. A phase of existence in which encounters and decisive experiences are condensed and subsequently returned to through memory.

Solo da bambini develops along three distinct stories experienced by each of the three artists, at times overlapping. Media and different approaches to art – painting, installation, photography and video – contribute to these experiences in their physical and conceptual form. The works presented include individual productions, works that are the result of collaborations between the artists or that require the involvement of performers, friends or occasional acquaintances.

The journey of Lina Fucà and Daniele Gaglianone was part of a project by AICEC, supported by the Fondazione Merz in collaboration with Brigata Doné within the framework of Italian-Cuban friendship projects.