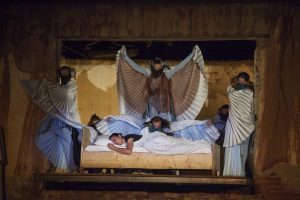 Petrit Halilaj (Kostërrc, Skenderaj-Kosovo 1986) is the winner of the art category of the Mario Merz Prize second edition, the biannual international award for art and music, inaugurated by the Fondazione Merz.

The newly commissioned solo exhibition in Turin is the culmination of an ambitious three-part project, curated by Leonardo Bigazzi, taking form in three different locations significant to the life and career of the artist. The first iteration was a performance – the largest public art project ever implemented by Petrit Halilaj – that took place on 7 July 2018 at the ruins of the Cultural Centre of Runik (Kosovo), the town where the artist grew up. This was followed by the presentation from 20 July to 19 August 2018 at the Zentrum Paul Klee in Bern (Switzerland), a point of contact between Shkrepëtima and the work done earlier by the artist with the RU series of works.

Finally, the project arrives in Turin in the form of an important and unprecedented final exhibition, the heart of which consists of a series of monumental installations recontextualising, within the exhibition space, the sets, costumes and stage objects of Runik’s performances. The Shkrepëtima project continues the artist’s investigation into the historical roots of the Kosovar town in which he grew up, reflecting on the potential of art and the value of memory. By intervening in the real world Halilaj intends to change the processes of the forming of collective history of his community, bringing it closer to its origins and calling into question some models that still regulate its social structure today.

The performance is the result of extensive research into the history of Runik, from its Neolithic origins to its recent past, and intended to act as a “spark” able to rekindle its cultural development. In the Albanian language the term “Shkrepëtima” means “flash” and, by extension, indicates a sudden and intense thought that works as an activator of consciences. The term also recalls the historical legacy of the homonymous multi-ethnic cultural magazine published in Runik between the 1970s and 1980s by the school’s teachers, who were directly involved in the local cultural programming.

The place that for thirty years has been the symbol of the cultural identity of Runik’s citizens is the House of Culture. Dating back to the Yugoslav era, the building used to contain a library of 7,000 volumes. a theatre that used regularly to hold shows and film screenings, and the site of the village cooperative. All activities had come to a halt when the political situation worsened before the war and the building was then partially destroyed during the conflict. It had been totally abandoned until the artist with some members of the community cleaned it up and made it safe to host the event. Even though the destiny of the House of Culture was uncertain, following the performance the Ministry of Culture ordered that the building be included in the list of assets of national interest, assuring thereby that it would be restored in future.

Until the outbreak of the terrible conflict that led Kosovo to independence, the House of Culture contained a large library, a theatre, a cinema and a cooperative. This aggregative function has found an echo in the work orchestrated by Petrit Halilaj, in a veritable theatrical piece and, although the fate of the House of Culture was at that time uncertain, following the debut of the performance, the Ministry of Culture has ordered the building to be made safe, saving it from destruction.

In Turin, the artist has reconstructed the proportions and volumes of the building of the former Runik House of Culture using the sets of the performance, within the space of the Fondazione Merz, an industrial structure of the 1930s. Halilaj has managed to relate two buildings and two very different realities, but they represent an important historical testimony and a point of reference for the communities that were born and grew up near them. His intervention therefore reminds us not only the centrality of places of memory in the construction of our identity, but also that their potential is not necessarily limited to a city or a nation, which can express itself in various forms generating new stories and points of view.