Fondazione Memmo: Conversation Piece V (There is no longer any beauty except in the struggle) 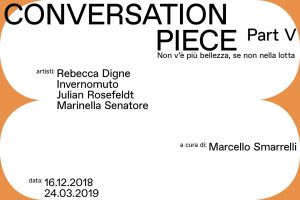 The Fondazione Memmo presents Conversation Piece | Part V, the new stage of a cycle of exhibitions, curated by Marcello Smarrelli and dedicated to Italian and foreign artists temporarily residing in Rome.

The subtitle of the exhibition: There is no longer any beauty except in the struggle, comes from a passage of the Futurist Manifesto, published by Filippo Tommaso Marinetti in 1909 in the French newspaper Le Figaro. This seminal text refers to the work of the artist as a way of taking up a political and intellectual position – as staking a claim to an autonomy and freedom that effects the civil sphere – but also as a manifestation of the self, and of a more interior and intimate dimension.

The works on show will be – in different ways and with different meanings – “manifestos” of several aesthetic approaches and practices, with which the artists will enter into dialogues between each other, as well as with the spaces of the Fondazione Memmo and with Rome itself, a city that has always been the epitome of artistic research, a privileged place for the production of works of art, and the inspiration of many theories that transcend the prevailing styles and tastes.

The inauguration of the exhibition, on Saturday 15th December 2018, at 6pm, will be animated by performances that will transform the atmosphere of the vernissage into an occasion of great expressive vitality, and genuine public event.

The spectators will be welcomed by the performance of Marinella Senatore (b. Cava de’ Tirreni – Italy, 1977), who will animate the courtyard of the stables (Scuderie) of Palazzo Ruspoli, by directing a dance company and a group of musicians playing live.

Inside the exhibition space a body of works will be displayed that present the highlights of this artist’s production for the first time. She has always been characterized by her vital political commitment and activism, with works that include: procession banners revisited in a contemporary key and placards bearing slogans that exalt the political struggle, posters with images and texts that reflect poetically on the concepts of revolution and democratic participation, a set of illuminations, similar to those that are so popular in small southern Italian towns, which urge us to participate in a liberatory running race (“Renn lieber, renn”), and a bicycle upon which megaphones are mounted, which is surely an ideal way of taking part in a protest march.

The intervention by Julian Rosefeldt (b. Munich – Germany, 1965) will also be surprising and intensely expressive. His work generally consists of meticulously staged and choreographed video installations, largely inspired by the history of cinema and popular culture.

With a rather exceptional approach compared to his usual works, the artist has devised a performance for the inauguration of the exhibition, inspired by the iconography of the equestrian monument and the concept of authority that is associated with it. Four living horses will enter the ancient stables of Palazzo Ruspoli, with decorative saddlecloths on which some articles of the Italian Constitution will be embroidered. The text of these articles deals with the concept of equality and the dignity of the person, without any distinctions of sex, race, language, religion, political opinions, or social conditions – values in the Western civilisation we took for granted but which are suddenly put into question by populist movements all over the world.

On the day of the opening, they will distribute thousands of copies of a printed fanzine, with the reproduction of a series of drawings and paintings donated to the artists by an elderly Rastafarian in Jamaica in 2015, during the filming of their project Negus. It is a fragmentary graphic novel and a personal “manifesto” concerning the Rastafarian cult, which the old man asked the two artists to support and spread as widely as possible. It is an alternative story that can become viral thanks to the contribution of the public. The fanzine will be distributed for the entire duration of the exhibition and simultaneously in the exhibition space of “Mega” in Milan.

In the poetic vision of Rebecca Digne (b. Marseilles – France, 1982) the work becomes an instrument that “manifests” a sensitivity directed towards the self, and an intimate personal sphere.

The artist will present her video, Tracer le vide, and eleven sculptures from the A perdere series. In the video colour and black and white images alternate to show a group of people engaged in the cyclical gesture of knotting a succession of ropes along the coastline from Naples to Marseilles (places that are connected to the artist’s childhood), in an attempt to connect the two cities, by drawing landscapes and boundaries that are mental as well as physical. The eleven sculptures form a constellation of abstract architectural figures that allude to the theme of transformation and precariousness and in fact they were created by a method that goes back to the very origins of the art of casting metal sculptures, the lost wax technique, in which the wax evaporates to leave an empty space to the metal molten to be poured into. The loss of the original form, and the passage from wax to metal, is a metaphor and a mirror of the unstable and transitory character of our lives.