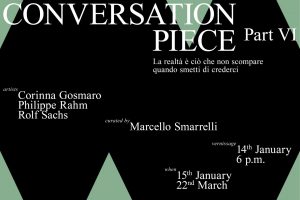 “Reality is that which, when you stop believing in it, doesn’t go away”

The Fondazione Memmo presents Conversation Piece | Part VI, curated by Marcello Smarrelli, the latest in a series of exhibitions dedicated to Italian and foreign artists temporarily present in Rome.

The exhibition, which will be open to the public from the 15th of January 2020 to the 22nd of March 2020, features Corinna Gosmaro (an artist with a CRT Italian Fellowship in Visual Arts at the American Academy in Rome), Philippe Rahm (an architect who is currently residing in Rome and a fellow of the French Academy in Rome at Villa Medici in 1999-2000) and Rolf Sachs (a Swiss artist and designer who has recently established his studio in Rome).

The subtitle of the exhibition, Reality is that which, when you stop believing in it, doesn’t go away, is a quotation from Philip K. Dick’s essay How to Build a Universe That Doesn’t Fall Apart Two Days Later (1978-1985), which affirms a positivistic vision of reality, based on the concreteness of objects. The nature of reality is also a central part of the reflections of the philosopher Maurizio Ferraris whose Manifesto of New Realism (2012) states – in contradiction to certain “dogmas” of postmodernism – that reality is not infinitely manipulable, advocating a return to “truth” and “objectivity” as a valid means for understanding the present.

Via della Fontanella di Borghese, 56/b