Fondazione MAST: “IV Biennal of Photography on Industry and Work” 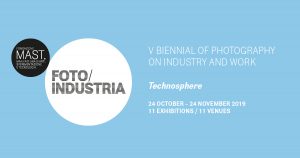 The fourth Biennale of Photography on Industry and Work, promoted and organised by the MAST Foundation, will take place in Bologna from 24 October to 24 November, featuring 10 exhibitions in the historic city centre and Anthropocene at the MAST, open until 5 January 2020

The MAST Foundation is pleased to present the fourth edition of FOTO/INDUSTRIA, the world’s first Biennale devoted to photography relating to industry and work, which will take place in Bologna from 24 October to 24 November. Curated by Francesco Zanot, it comprises 10 exhibitions in venues around the city centre and one at MAST, curated by Urs Stahel.

Works by celebrated names in the history of photography, such as Albert Renger-Patzsch and André Kertész, whose images are now part of a shared iconic heritage, will feature alongside those of great contemporary Italian and international artists like Luigi Ghirri, Lisetta Carmi, Armin Linke and David Claerbout, and young internationally established photographers such as Matthieu Gafsou, Stephanie Syjuco, Yosuke Bandai and Delio Jasse, showcasing a variety of techniques ranging from the most traditional uses of photography, to a more innovative experimentation with the medium.

The central theme of Foto/Industria 2019 is the built environment: a crucial element intimately rooted in the nature of the human species, explored here from every angle, from its historic and philosophical roots to its inevitable scientific implications. Encompassing cities and industries, energy and infrastructure networks, communication and digital networks, the Biennale sets out to investigate the complex dynamic construction systems that distinguish the presence of humans on the planet. It is this activity which has given rise to the technosphere: the whole set of structures that humans have built to ensure their survival on the planet. Weighing an estimated 30 trillion tons, this artificial layer over the earth’s crust was defined as the Technosphere in 2013 by Peter Haff, professor of geology and civil engineering at Duke University. Through the eyes of the artists, the exhibitions offer a panorama of this new artificial layer, built by human hands over the course of time and growing at dizzying speed.

“The vast impact of the intervention by humans on the environment and everything surrounding them is made evident by the diversity of subjects and places represented in the artists’ images. A fundamental medium for shaping and constantly updating the collective imagination over the last two centuries, photography is at once an indispensable research tool and a product of the inextinguishable human need to change the world and see it afresh,” observes artistic director Francesco Zanot.

The imprint of human activity on the earth is also the focus of the eleventh exhibition, which is running at MAST until 5 January 2020: ANTHROPOCENE. This multimedia show documents the impact of human beings on the planet through the extraordinary photographs of Edward Burtynsky, the films of Jennifer Baichwal and Nicholas De Pencier and a series of augmented reality installations.

Produced and promoted by the MAST Foundation, Foto/Industria was created in 2013, with François Hèbel as artistic director for the first three editions, with the aim of sharing the Foundation’s cultural mission with the city. An international non-profit organisation associated with the industrial group Coesia, the Foundation is conceived as a bridge between the company and the community.

MAST (Manifattura di Arti, Sperimentazione e Tecnologia) is a space for connecting and sharing, and hosts various activities, including the PhotoGallery, which, with its own collection of industrial and work-related photography curated by Urs Stahel and a programme of temporary exhibitions, makes it the only institution in the world devoted to photography about work.