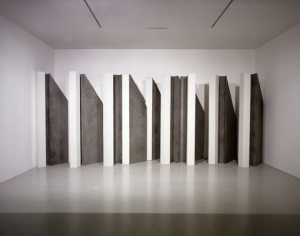 Marconi Foundation has the pleasure to present the exhibition “Giuseppe Uncini. The Conquest of the Shadow” dedicated to the work of the Marche artist between 1968 and 1977. Four years after the 2015 exhibition focused on drawing, this exhibition project, in collaboration with the Uncini Archives, aims to document the evolution of the artist’s long and thorough investigation of the theme of shadows. The starting point is the exhibition, entitled “Shadows”, which took place in 1976 at Studio Marconi and for which the artist created “Grande parete Studio Marconi MT 6,” expressly designed for the Milanese gallery. This work belongs to the period in which Uncini decided to shift his attention from the “construction of objects” to the “construction of shadows”, from the real form of the built object to its virtual form. In this new perspective he transforms what has always been perceived as ambiguous and labile into a substantial element of the work, something stable, visibly and tactfully concrete. Light and shadow are thus placed at the same level of value and considered “materials” in the same way, allowing a new and unprecedented reading of the work. This discovery, which was the dominant motif of his research until the 1980s, also led him to reflect on the antinomies light-shadow, full-empty, presence-absence. It is therefore the space that becomes the material of the artist’s constructive act and there is no longer a distinction between painting and sculpture.

“Until then I thought I was and wanted to be a painter. Then this conviction gradually fell under my hands. Later I became, they tell me, a sculptor. I still don’t believe in it and I feel between sculpture and painting and I’m fine with it, there’s no problem with that.” (G. Hooks, 1998)

For its majesty, the Great Wall represents an apical moment of Uncini’s research and marks his definitive conquest of that “fleeting essence” which is now an integral part of the work itself.

“The shadow, this fleeting essence, this negativity of the sign, which all too often is ignored or passed over in silence, which almost always counts only as a passive factor, of absence, at most of completion of the investigation – was instead to constitute, at a certain point, the centre of the artist’s investigations; not as an artifice for a perspective or naturalistic rendering, but as a ‘highlighting’ (not only metaphorically) of a substantial element of the work”. (G. Dorfles, 1976)

The exhibition presents a nucleus of works, from 1968 to 1977, with the aim of providing a complete excursus on Uncini’s creative production during this period. All the main declinations of the artist’s assiduous need to investigate the virtual dimension of volume projection will be reviewed: from the first Chair with Shadow and Window with Shadow (1968), to Columns with Shadow (1969), Shadow of a Suspended Cube (1973), Wall with Shadow T.23 (1976). In addition to these, there are some significant works from the Archivio Uncini collection: Brick with Shadow No. 12 (1969), Interrupted Wall (1971), Shadow of Two Parallelepipeds T.1 (1972), Shadow of a Parallelepiped M.29 and Shadow of Three Squares M.30 (1975). Next to the Great Wall will be exhibited the original maquette of the work, made of cement and laminated wood (1975-1976), some documentary photos taken during the execution of the work and a selection of drawings made in the same years, since in Uncini the drawing has played, since the beginning of his activity, a role of primary importance for the design of his work.

“In our culture, in our history, I think drawing is our language, our way of memorizing things, of building. I think it is very difficult to think without drawing… Any drawing on a sheet of paper is a tool, a language to identify our thinking.” (G. Hooks, 1998)

The exhibition will be followed by a book on the theme of shadows, edited by Bruno Corà, and in collaboration with Archivio Uncini.