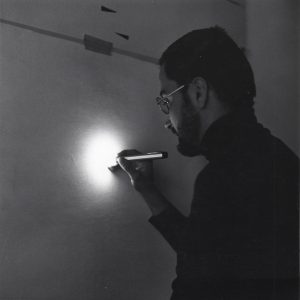 “What attracts me is the free and sensual curve.
The curve I meet in the mountains
and in the rivers of my country,
in the clouds of the sky, in the waves of the sea,
in the body of the woman you love.
The whole universe is made of curves.
Einstein’s curved universe.”
Oscar Niemeyer

It is an affectionate memory that the Marconi Foundation intends to pay with this tribute to the memory of Bruno Di Bello one year after his death.
The presentation of a selection of works, from the first “writings” of the Neapolitan period, perhaps less known to the public, to the most recent works made with the help of the computer will be a moment of encounter for all those who knew and appreciated him, as well as an opportunity to announce the birth of the Bruno Di Bello Archives by his heirs who, throughout the week from 6 to 7 pm, will be present at the exhibition available to the public.

The artistic history of Bruno Di Bello begins with his joining the ’58 Group of Naples. In 1966 he had his first solo show at Lucio Amelio’s Modern Art Gallery, which defines his “signs of light” as the fruit of a magic: a spell created in the darkroom with a small light that impresses lines and dots on a white canvas. Finding the primary meaning of painting is his main objective.
He pursues it starting from light and sign, returning “to make the auctions”, to obtain the most elementary sign possible.

“Raising my arm with the pile lit up to the upper limit, in small jerks, and going down to the ground, stopping, starting again, always without seeing what sign he is doing, gives me that little vertigo I need more and more.
Nothing comparable, then, to the emotion I feel when I develop the canvas and the sign appears: always a little different from what I would have expected… The pleasure of lighting a light in the dark, the surprise of the transformation of this light into its opposite: everything is here.” (Bruno Di Bello, April 1979)

A year later, in Milan, Di Bello made a turning point in his activity by carrying out surveys on the possibilities of decomposition of the image that he implements through the use of photography.
The photosensitive canvas remains his favorite medium: on it the image is captured, decomposed, analyzed, and then recomposed before the viewer’s gaze. This is followed by a research that continues the operation of decomposition by working on words/concepts whose meaning is lost and found again and again.

A protagonist of Studio Marconi’s history in the years between 1971 and 1981, he exhibited his works at the Marconi Foundation in 2010, 2015 and 2018, after a period, already in the late 1980s, in which he decided to dedicate himself to the study of new technologies, in particular digital photography, which in the meantime allowed him to become a master of knowledge in the field of computer image creation and processing techniques.
He resumed exactly where he had stopped with his previous experience, that is, from the analysis of the constituent elements of the sign, reproposing with logical consistency the objectives pursued since the beginning.
In the last exhibition in 2018 at the Marconi Foundation, historical works from the 1960s and 1970s are compared with more recent works from the 2000s created on the computer, demonstrating how themes and procedures, albeit in different languages, materials and techniques experimented over time, continue to be used in his creative work.
The works present in this tribute – from the first oils and photographic reports on canvas of 1962, to the “moons” of 1971, to the “signs of light” of 1976, up to the “fractals” of 2002 – are just some of the many that could have been chosen to recall the work of Bruno Di Bello, pervaded by underground analogies between past and present, his analytical and constructive attitude, the progressive and constant investigation of the fragment.
One of the most credible and authoritative artists in the “competent and expert use of digital technologies”, Bruno Corà defines him in the text written for the 2015 exhibition at the Marconi Foundation, always recognizing in his most recent work a close connection with the youthful period. His path as “explorer and troubadour of other ‘places’ and new beauty” is a prelude to the “visuality of digital technology”.
Bruno Di Bello’s work, capable of reconnecting past and present and of renewing himself, leaving the initial assumption unchanged, certainly knew how to “turn on a light in the dark”, and imprint a tangible and precious sign of his life as a man and as an artist.