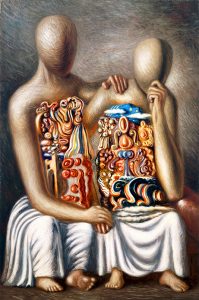 This major exhibition dedicated to Giorgio de Chirico and Savinio, the “dioscuri” of 20th century art.

The two brothers have rethought the myth, the ancient, classical tradition through the modernity of the vanguard and the quotation, translated and reinterpreting them to attempt to respond to the great enigmas of modern man, giving rise to what Breton He defined a real modern mythology.
The exhibition – held at the Masterpieces, the Foundation’s headquarters at Mamiano di Traversetolo Parma – presents over 150 works, including famous paintings and amazing artwork, in an exhibition that, since the birth of the adventure metaphysics, focuses on a modern rethinking of mythology and comes to full production for the theater, also documented by precious sketches, sketches and costumes for opera del Teatro alla Scala di Milano.

The Dioscuri of art
«Are the explanation of the other» said Jean Cocteau of two brothers de Chirico. Located close by in the first steps of their respective careers, de Chirico and Savinio work closely during the first years in Paris. André Breton called their work “inseparable in spirit”: the visions conceived by Giorgio in those years, they find a literary consideration in the poetics of his brother; Despite the credit has been historically attributed to the genius of de Chirico, today is now recognized the role played by Savinio in the development of the aesthetics of metaphysical art.

The exhibition, curated by Alice Ensabella, University of Grenoble, and

, Scientific Director of the Fondazione Magnani-Rocca – aims to reconstruct critically the common sources of the brothers De Chirico to evidencing affinity, disagreements and interpretations of the fantastic universe that takes shape in their pictorial, literary and theatrical translations.

Giorgio  (1888-1978) and Andrea (1891-1952) de Chirico are born in Greece, where they spend throughout childhood. Children of an upper middle-class and cosmopolitan milieu, received a solid education, influenced by romanticism and German nihilism, from classical Greek culture-Art Paris, certainly, but also deeply Italian.
This particular philosophical, artistic and literary imprint, moulding the minds of de Chirico brothers in their formative years and early years, will result in one of the most original and highest of Italian figurative culture Twentieth century

Colder, mental and conceptual, de Chirico, even after the great season metaphysics does not waive representations still filled with puzzles, which will characterize his landscapes that recall the myths of antiquity, horses in the ruins of civilization Greek, Gladiators going to live or die, self-portraits and still lifes.
Play and irony are the hinges around which revolves the aesthetics of Alberto Savinio. Unlike his brother, in fact, Savinio demonstrates an innate ability to enter in the profound metaphysical silences the masterly lightness of irony, which unfolds through a great visionary. In his works, inanimate objects and animate beings come together in one colourful and vivid representation, in which human and animal forms mingle and give context, placed in impossible and improbable atmosphere perspective how fun.