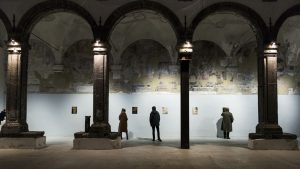 The Black Square exhibition created by Nicola Samorì for the Made in Cloister Foundation and curated by Demetrio Paparoni is an important exhibition project in which the artist’s work and research find their most natural place inside the sixteenth-century cloister of Santa Caterina, home of the Foundation.

“Nicola Samorì has interpreted the Made in Cloister project in the best possible way, relating easily with the City of Naples, the stratification of its artistic heritage, its culture and its traditions” says Davide de Blasio of the Made in Cloister Foundation. The artist has used the materials of our tradition and created a site-specific exhibition project of great impact, forgetting the conservative aspects and enhancing the power of change.

Vesuvius as imaginary material of the city and of the works of art. The temporal stratifications of the urban fabric like iridescent fossils, a vision sunk into the rock, in the magma of transformation and in the possibilities of its regeneration.

At the centre of the cloister there is a monumental five-meter high sculpture, Drummer, grown like the Neapolitan obelisks, by the addition of heterogeneous elements. In the lower part, which ends with a tripod, you can recognize the shapes of a baroque candelabrum. This ornamental base holds a colossus inspired by a small ivory figure, Death as a drummer, a skeletal figure with an hourglass-like body, carved by the German sculptor Joachim Henne in 1670/80 and kept at the Victoria and Albert Museum in London. The whole sculpture is covered in volcanic lapilli.

At the foot of this chimera, a compendium of Vesuvius, of the Neapolitan Baroque and of the idea of a “monument to superstition”, there is a vast black square, made of lapilli, which replicates the perimeter of the wooden Bourbon cage that stands inside the cloister. Thousands of stoneware heads, the same colour as the lapilli, are scattered on this “black beach”, like shells on the sand.

A single severed head of Saint Gennaro, in translucent Mexican onyx, takes on real proportions and distances itself from the volcanic carpet.

The heads remind us of the beheadings of Saints Gennaro, Desiderio, Festo, Sossio, Procolo, Eutiche and Acuzio, which, according to legend, took place at the Vulcan Forum. Vesuvius itself is one of the causes of the spread of the cult of Saint Gennaro, a link that dates back to 1631 when during one of the most disastrous eruptions the lava lapped the city and stopped at Porta Capuana – a stone’s throw from Made in Cloister – in the presence of the saint carried in procession -.

Drummer faces two oil and sulfur paintings on copper. The paintings represent two saints, one taken from José de Ribera (San Paolo Eremita) and the other from his pupil Luca Giordano (San Bartolomeo scorticato). The copper paintings are set in the blind windows of one of the walls of the Cloister, and like eyes weep pigment, long strands of oil paint slide to the ground from the copper support.

On another side of the cloister there are six frescoes deriving from the same source – a Marsyas hanging from a tree, taken from a homonymous sculpture preserved in the Capitoline Museums in Rome – subjected to six consecutive lacerations that allow you to enter the depths of the plaster and the body of the image.

Finally, a sequence of small onyx paintings complete the exhibition, oils surround wounds coinciding with the geodes of the stones, spontaneous cavities that, from time to time, become the severed neck of Saint Gennaro, the wound on the side of Christ or those left by arrows on the body of Saint Sebastian.

Fondazione Made in Cloister