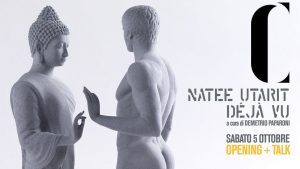 The exhibition Déjà Vu by the Thai artist Natee Utarit (Bangkok 1970) will be held at the Renaissance Cloister of the Church of Santa Caterina in Formiello showcasing the testimonies of an imaginary journey of Buddha in Naples. As the curator of the exhibition, Demetrio Paparoni, points out, Utarit imagines a hybrid place and a time in which the Greco-Roman culture and that of Buddhist Asia meet and interact, in a constructive relationship of interchange.

The exhibition is composed of several site specific works, some of which were made in collaboration with the artisans of the city. The exhibition was created with the unique environment of the cloister in mind and tailored to the specific architectural details such as the portico, and large central space where two white papier-mache statues have been placed. The statues are modelled on a walking Buddha and the Roman statue of the Polyphitic Doriphorus kept in the Archaeological Museum of Naples.

Made in Cloister is organising a talk in conjunction with the opening of the Natee Utarit Déjà Vu exhibition, involving some important private foundations. To discuss how private foundations have and can continue to contribute to the current flourishing art scene in Naples.

The talk revolves around the idea of the Made in Cloister mission which is: the creation of a network of creative businesses, the identification of entities already operating in social and cultural areas, dialogue with local museums and educational institutions, the interaction between artists and craftsmen.

These elements allow the ability to engage in urban suburbs and their inhabitants, like the area of Porta Capuana, contributing to the growth of awareness of what is necessary for increased welfare and the maturation of the community.

​Fondazione Made in Cloister