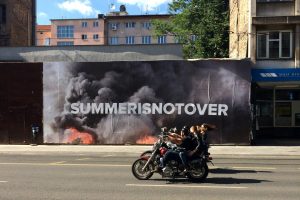 Within the wide range of our contradictory civilisation and its cultural mechanisms, Šejla Kamerić almost obstinately focuses on telling details of significant pictures. Their amoeboid features represent events dissolving in an ever-growing stream of information noise, but nevertheless, they can work as triggers and at the same time indicators of social calamity. The artist repeatedly utilises her ability to transform acute moments of everyday reality into impressive and aesthetically attractive signs. The active zones of the visual symbols fill up the gaps in remembrance, but at the same time, they offer a liberating experience; in chasms of memory they make it possible to climb towards hope.

For Fondazione Adolfo Pini, the artist has created a new, site-specific project, working on the existing space and its structure. This site-specific project comments on our perception of the news, pointing at the changed role of photography as well as the issue of today’s usage of (war) images and their distribution. Historically, wars and revolutions have often started in spring and summer, while perhaps today, during these seasons we make a heightened use of social media to illustrate our projected lives. By distorting the alleged authenticity of the photograph, while using the exact same techniques of social media to reach a widespread audience, SUMMERISNOTOVER overcomes the traditional belief that photography exists in separate and controlled categories. It forms one giant image stream to remind the viewer that summer is not over—war is not over.

Šejla Kamerić was born in Sarajevo, Bosnia and Herzegovina. She grew up during the war and survived a three-and-a-half years long period of city siege and bombing. This biographical fact has defined the attitude of the artist, as well as her understanding and practice of art, to a great extent. She has received widespread acclaim for her poignant intimacy and social commentary. Her work is based on her own experiences, memories and dreams. It takes us to spaces of displacement and discrimination, and insists on the idea that delicacy and sublimacy are not pushed aside by catastrophe or hardship.