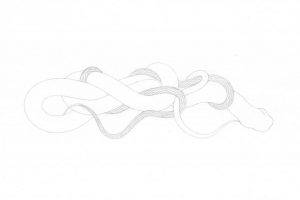 The site-specific project intends to compare the different nuclei around which the artist’s research is developed. Alongside drawings, collages, pictorial and sculptural works, a selection of notebooks are exhibited, through which it is possible to reconstruct the different stages of Giovanni de Lazzari’s work, right from its genesis. The result of a meticulous investigation, the works were created by the artist during a long solitary meditation, as evoked by the title itself.

The works on display, created by Giovanni De Lazzari from 2008, follow the common thread of the relationship with nature, which originates from a process of profound and prolonged observation. Through the pencil stroke, the most assiduously used tool by the artist, images and texts take shape as miniatures in the pages of the notebooks that De Lazzari creates in a daily practice, up to the architectural scale in the wall-drawing created for the exhibition.

The plant and animal elements, recurrent in the exhibited works, establish an unprecedented dialogue with the decorations and furnishings of the home-studio, as well as with the paintings of the painter Renzo Bongiovanni Radice. This is the case of the Abbracci triptych of drawings (2013), in which the intertwining of two snakes creates a powerful image suspended between love and death.

The fulcrum of the artist’s poetics is a reflection on the meaning of the images, which he refers to the etymological root of the term. “Thinking about zoology I like to compare the development of images to that of some insects, for which the final stage of their metamorphosis is called imago,” says Giovanni De Lazzari.

“GIORNI SEGRETI” opens up various issues dear to the artist, starting from the very meaning that the production of images takes on, in an age that is now saturated, and that sees their use often instrumental to the “construction” of reality and to propaganda. To the need to establish a relationship with nature that goes beyond extractive logics, with a view to a change of perspective that drastically relativizes the position of the human being in the world. From living in a world of objects to be manipulated, to entering into a relationship with a world of subjects.

The tension produced by the works of Giovanni De Lazzari underlies every one of his works, arising from the sedimentation of glances and images deriving from moments lived in the present or that re-emerge from memory, as well as from the artist’s personal archive, which eludes from aesthetic value orders vested. The juxtaposition, assembly and creation of new relationships between full and empty, between center and periphery, leads to reconsider the subjects, in an act of constant care for images through traditional techniques of drawing and oil painting. The infinitesimally small, therefore, assumes a new importance, in an ignition of looks and thought that finally gives importance to the margin.