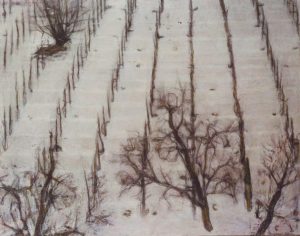 The works on display recount the pictorial career and soul of Bongiovanni Radice, from the 1920s to the last years of his artistic production, 1970.

The fifty years in which his story unfolds are probably the most volcanic in the whole history of art (if we exclude the decade of the last century). However, Bongiovanni pursues his path on his own, without worrying about “novelties”, trying to constantly refine the idea of traditional painting in which a thousand suggestions borrowed from as many artists are reflected, and which assumes above all that aspect of “decorum” typical of the Milanese industrial bourgeoisie. Almost a recipe: knowing everything, taking the best, letting it settle until the best, cooled down, no longer risks burning the palate.

Non-metaphorically, the masters from whom Bongiovanni Radice draws directly – by attendance – or indirectly are, in bulk, Attilio Andreoli, André Lhote, Arturo Tosi, Carlo Carrà, Alberto Magnelli (in his figurative phase at the turn of 1930), Maurice Utrillo, Mario Mafai, Virgilio Guidi, Filippo De Pisis, Piero Marussig, Giorgio Morandi, back to Tranquillo Cremona, Edgar Degas, even Eugène Delacroix. We then recognize an important nineteenth-century derivation, a calm adherence to the styles of the Italian twentieth century, without, however, the monumentalism of the figures, which are not among Bongiovanni’s favorite subjects after his first period, and a curiosity almost driven to the mention of the most famous vedutas between the eighteenth and nineteenth centuries, but what finally comes out of all the works is the melancholy of a man alone, engaged in a close relationship with nature – hence the vocation to landscape – to which he asks for answers to existence, while the cities he loved – Milan, Paris, Venice – are almost always portrayed in winter and empty of their inhabitants.