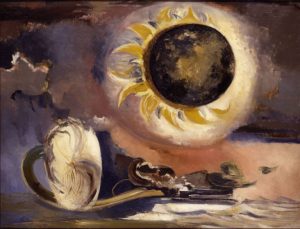 The Fondation Vincent van Gogh Arles brings to its space the British artist Paul Nash (1889-1946), a major painter of the 20th century still under-recognized in France, whose works selected for this exhibition are imbued with a surrealist atmosphere and a sense of the finite, against a backdrop of death and war.

Paul Nash combined a fascination for natural landscapes with his very personal vision of the real and imaginary worlds which surrounded him. This led him to create an extraordinary body of work, which sets him among the most important British artists of the 20th century.
Centered around Paul Nash’s unique perspective – inspired by nature, transformed by his experience of war and influenced by an increasing awareness of his mortality – this exhibition will feature over thirty works painted during the period from 1918 to 1946. Paul Nash’s work bears the influence of a multidisciplinary approach, as well as the artist’s interest in a wide range of subjects, from Christian Science to hot air ballooning, and the mystic poets through to archaeology, photography and design.
Presented in reverse chronological order, the exhibition begins with an impressive series of paintings made by Paul Nash during the final years of his life: the visual explosions of Sunflower & Sun (1942). Besides, the exhibitions displays a series of landscapes and skyscapes painted in the surrealist style, as well as his precocious melancholic landscapes created in the 1920s as a response to the First World War.

The exhibition will also feature other documents, including photographs and archives,  that will shed light on a little-known aspect of this artist’s life and work, that being the influence of the South of France and French painters (such as Paul Cézanne and Jean Lurçat), gleaned during Nash’s various journeys to France in the 1920s and 1930s, including a short stay in Arles.