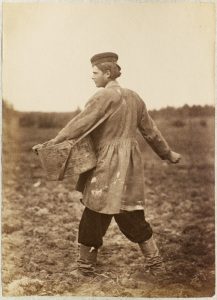 On 16 November 2019 the Fondation Vincent van Gogh Arles opens its new thematic exhibition titled …et labora. Around one hundred photographs dating from the nineteenth and early twentieth century, issuing from the spectacular collection of Ruth and Peter Herzog, constitute the starting point for this exploration of the theme of work. These rare images, assiduously collected over the years, bear powerful witness to Van Gogh’s epoch as well as to the roots of the social realities at the start of the 1900s, a period of booming industrialisation.
The black and white analog photographs – prints and postcards, some anonymous, others by celebrated photographers – document, among other things, the transformation of Europe’s major cities into megalopolises, the mechanisation of agriculture, the objectification of the worker in service to the factory, and also the development of tourism and leisure. This selection of photographs thus sketches the outlines of an entire bygone era.

These are complex documents, capturing fragments of realities while at the same time revealing the different facets of the contemporary lens trained upon a rapidly mutating world. These images are joined in the exhibition by other modes of representation of labour. Borrowing from the codes of the burlesque and docufiction, the works of contemporary artists such as Mika Rottenberg, Yuri Pattison and Emmanuelle Lainé transpose the theme into a more dreamlike and speculative space. Photographers Andreas Gursky and Thomas Struth confront us with images whose transcription of reality fascinates us as much as it escapes us: appealing both to our reason and to our sensibility, these pictures thus forcefully interrogate our perception.
Thanks to their proximity to history photography, the works of Liu Xiaodong, Gursky and Struth explore the transformation of activities and workspaces, resulting from the globalisation of services that is drastically changing the value of employment. Cyprien Gaillard’s excavator heads evoke the persistence of our relationship towards the earth as one of domination and exploitation, as well as the ceaseless transformation of cities.

As in the exhibition La Vie Simple – Simplement la Vie / Songs of Alienation (01.10.17–02.04.18) presented previously at the Fondation, …et labora includes works of folk art in the shape of votive paintings from the nineteenth and twentieth century. Representations of accidents – whether in relation to transport, work, or seafaring – make up a considerable proportion of these, and increased steadily during the nineteenth century. Arising out of a simple and direct act of faith, these ex-votos nevertheless reflect the secularisation of mentalities, discernible through the evolution in their iconography. This movement away from the religious sphere echoes in the title of the exhibition, an updated variant of the phrase “Ora et labora” (“Pray and Work”).