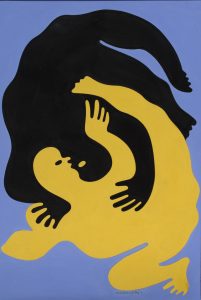 The 25 works presented are exceptional. Not only do they punctuate each period of the artist’s career, but they are in themselves works judged to be major by Victor Vasarely himself, who had meticulously selected them for presentation to the public. For 24 years they have been hidden from the viewer’s eye.

This exhibition is complemented by a projection of some of the dispersed works as well as numerous press articles and excerpts from court rulings explaining the process of spoliation of the institution’s collections.

“This collection is intended to bear witness to, and shed light on, the path I have traveled to arrive at my current conceptions as a visual artist.

In this sense, the didactic museum is one of the two major poles of my work, the other being at the foundation of Aix-en-Provence”.

It was in these terms that Victor Vasarely spoke in 1977 of the Didactic Museum of Gordes, whose Renaissance castle he had restored, with his own money, in order to offer a monumental place for dialogue with his painted work.

This museum will close its doors definitively in 1996 following an arbitration carried out between 1995 and 1997 which will result in the dispersion of the works, as well as part of the collections of the Aix Architectural Centre.

It is part of these collections, rescued from an auction in 2013 and entrusted to the custody of the Foundation by a court decision, that is being presented this summer.

The Vasarely Foundation remains hopeful that, in the near future, works by the father of Op’art will again be exhibited in the Château de Gordes, having in recent years initiated a productive cultural relationship with the commune, owner of the château.