Fondation A Stichting: Vincen Beeckman ‘A castle made of sand’ 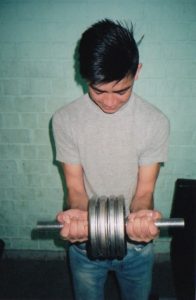 In a world where there are people who only think about building walls and where inward-looking attitudes sow the seed of indifference and violence, the committed photographic approach of the anodyne artist Vincen Beeckman (born in Brussels in 1973) has a role to play. His various interventions consist of building bridges, bringing into play all these tenuous links that can bring people, citizens, passers-by, etc. closer. Therefore for already over ten years, he has been meeting people welcomed by the Petit Château, a former barracks dating from the 19th century located along the canal in the center of Brussels and transformed in 1986 into a reception center for asylum seekers, currently managed by the Federal Agency Fedasil. There he meets unaccompanied minors from the CADE (Foreigners’ Rights Access Centre). When communication is not possible, as he speaks neither Pashtun nor Albanian, Vincen Beekman uses his camera and photographic images to create dialogue, to encourage meeting and initiate sharing. Far from investigative journalism or images with a strong impact, his approach is simple, immediate. It consists of opening out the scope of the photographic image, by increasing the number of interventions as well as the participants. He produces his own images, collects from others (selfies) and encourages the people he meets to take some (disposable cameras). A Castle Made of Sand brings together many very diverse images. Sticking together like grains of sand forming a castle, these images bear witness, speak to us and challenge us about the lives of these men and women that must be kept on an even keel.

Vincen Beeckman, a member of the former collective BlowUp, is responsible for the programming for the Recyclart association, a dynamic laboratory generating socio-artistic experimentations, meetings and urban initiatives.