Fondation A Stichting: Robert Adams “A Right to Stand” 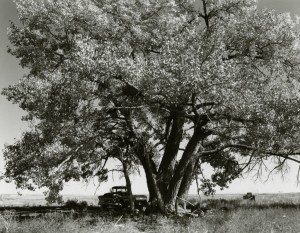 ‘They seem to rejoice and they seem to suffer. But they also seem to know a stillness that we can’t experience, at least not for long (Robert Adams). The exhibition begins with a set of photographs taken in Colorado and published in 1994 as Cottonwoods. A species revered by some American Indian tribes who believed the stars originated in the cottonwood, in low demand by the agricultural industry due to its poor commercial value and need for abundant water, however the cottonwood tree is for Robert Adams so close to us.

Robert Adams was born in 1937 in Orange, New Jersey. He lived in Colorado for a long time before moving even further west to Oregon. His interest in literature and large stretches of wilderness pushed him to definitively adopt photography at the end of the 1960s. His photographic work, that since then has demonstrated both the essential role of nature in our existence as well as the part we have played in altering it, has been widely published and exhibited.

The exhibition mainly comprises photographs from the series Our Lives and Our Children, Photographs Taken Near The Rocky Flats Nuclear Weapons Plant published by Aperture in 1983 and a second book, No Small Journeys, Across Shopping Center Parking Lots, Down City Streets published by Matthew Marks Gallery in 2003. These images were all taken in and around Denver, between 1979 and 1982, in a reaction to the nearby factory producing plutonium detonators used for nuclear and thermonuclear weapons. The standpoint here is aligned more closely with that of a child, the camera is concealed and the images cropped. A small spark of spontaneity emanates from these tender and animated photographic portraits, counterbalancing our fear of a potential and unspeakable catastrophe. How do we cope with what frightens us? These photographic images by Robert Adams help us, fuelling our resistance and resilience.