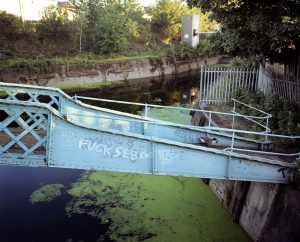 Tales without words, the little book Adventures in the Lea Valley, published by Hoxton Mini Press in 2016, presents photographs taken by Polly Braden and David Campany. It resembles both a travel journal and a personal diary. The images were produced with a shared camera and photometer. They are the result of many a moment spent exploring various stretches of the Lea Valley. The River Lea originates north of London. It flows through east London where it meets the River Thames. The ‘green and humid world’ of the Lea Valley is a hybrid zone where the diversity and the unexpected encourage wandering. There is a curious blend of small factories and abandoned buildings, rubbish tips and natural reserves, social housing and smart flats, football pitches and golf courses… The two English photographers seek as much to describe a place as to record experiences. Part of this abandoned area, taken over by recreational activities, was extensively revamped prior to the Olympic Games 2012 witnessing the acceleration of gentrification brought on by this event. Polly and David’s photographs, landscapes and portraits, flirt at times with the tradition of social realism. Certain images are reminiscent of those taken along the former A1, The Great North Road, by Paul Graham, others feature, not dissimilar to Jeff Wall’s paintings, people lingering, or even waiting for dialogue. These photographs, of incidents and encounters, are also visual constructions that form and unravel the link between observation and production of photographic images to describe social contradictions, the eventuality of a place and its alterability.