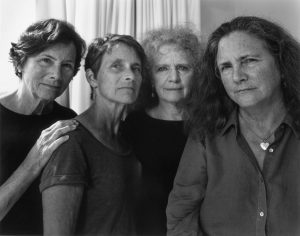 Nicholas Nixon (born in Detroit, Michigan in 1947) is a unique and landmark entity in the history of photography in recent decades. His artistic portrait work, harnessing the descriptive potential of the camera, reveals both what is seen and what for the most part remains invisible. Nicholas Nixon’s photographs capture fleeting, suggestive and impossible to describe moments such as love, passion, happiness, suffering, intimacy, passing time and solitude. Their ability to convey emotions bestows his work with a universal value. Less stereotypical discourse, they question the enigmatic depths of the human soul encompassing couples, families, the sick and the elderly. Nixon approaches these glimpses of real life at his fingertips with a large format camera inducing proximity and the cooperation of the subjects photographed.

This exhibition organised by the Fundación MAPFRE de Madrid in partnership with the Fondation A Stichting, presents a broad selection of his photographs from the various series created by Nicholas Nixon. Kehrer Verlag has published the exhibition catalogue