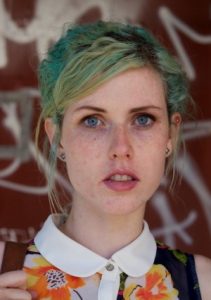 Spanning almost five decades the American photographer Jerry L. Thompson (born in 1945 in Houston, Texas) compiled a huge and strange gallery of seemingly very classic portraits. He refers to his images more as descriptions than interactive. Each portrait is an encounter, albeit brief, but it is first and foremost an invitation. The people approached along the way are simply invited to pose without receiving any further guidance. These anonymous people appear, let themselves be viewed and interpreted. The first portraits, black and white contact sheets of players in the metropolis and gang warfare, were produced at Coney Island at the start of the 70s. At the time, the artist frequented the great American photographer Walker Evans and became his principal assistant. He was also intrigued to discover the work of August Sander. Jerry L. Thompson chose to use a large format camera 20 x 25 cm (8 x 10’’) strengthening and intensifying the physical presence of the subject photographed. His most recent photographs, in colour, were taken with a digital camera in Williamsburg, a neighbourhood in Brooklyn. The bodies presented communicate and take shape with their attitude and body language, the fabric of their identity, clothes, hairstyle and make-up. They compete with their tattoos and piercings. Personalised bodies that, like stick insects or chameleons, are projected on fragments of the city used by the artist as his studio. With these last shots, Jerry L. Thompson attentively explores the paradoxical transformation of personalised skin, alternating between individualisation and belonging, in a portrait of a young generation that stands out, that is finding its way.

Jerry L. Thompson has written several books on photography: The Last Years of Walker Evans (1997), Truth and Photography (2003), Why Photography Matters (2013). His work was recently exhibited at Photographische Sammlung/SK Stiftung Kultur in Cologne.