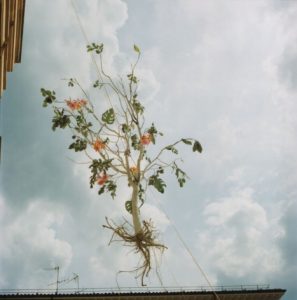 Cesare Fabbri, born in Ravenna in 1971, studied urban planning and photography at the hands of the historian and photographer Italo Zannier at the IUAV in Venice. He teaches alongside Guido Guidi. In 2009 he founded the Osservatorio Fotografico in association with Silvia Loddo.The Flying Carpet exhibition brings together and presents three series of photographs by the artist Cesare Fabbri for the first time. Each of the photos in the series, Orlando, shows initials carved on the bark of a tree. Despite plant extending and the bark swelling over time, these marks remain. This forest of feelings has its roots in the epic poem Orlando furioso written between 1504 and 1516 by Ludovico Ariosto. Such a dazzling kaleidoscope of terrific adventures that Cardinal Ippolito (I) d’Este declared: ‘Dove avete mai trovate tante fanfaluche?’. The Flying Carpet, the second series,is an enchanting collection of 60 photographs – floating images, curious or funny objects, bizarre situations– collected by the artist along paths and roads. MACK has published this collection in tandem with the exhibition at the Fondation A Stichting. The photographs in the third series were taken very recently in Sardinia. Huge black and white landscapes incorporate a blend of unspoilt nature, traces of the past and new ruins recalling paintings by great American landscape artists.