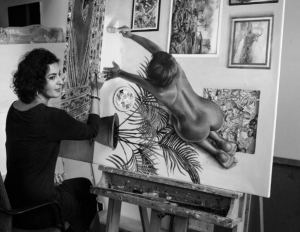 Born in 1981 in Teheran, she lives and works in Paris.

“I always start by defining the location of the characters, before thinking about the setting. Most often, I have a scene that obsesses me with a precise posture. I then ask models to pose for me and take pictures of them so that I can quietly work on my composition. It is only once I have created the characters that I devote myself to the set. This one comes progressively, like a puzzle in which each element brings a new one.
The models that I paint are very real, whereas the set is the result of my imagination. In front of my canvases, the viewer is thus destabilized because he thinks he recognizes elements of the painting, whereas as he walks along, he understands that nothing holds, that everything is only illusory. »

The most diverse symbols and images rub shoulders in his works: a manifesto of the cultural plurality from which Nazanin Pouyandeh draws his inspiration.

“I’ve looked a lot at the primitive arts, the primitives of the Middle Ages, the Persian miniatures. But I draw my inspiration from the fine arts, as well as from cinema, photography, advertising, or even from my personal experience through my travels in Africa, India, China, Tibet… My works are in a way a mixture of images from different territories and eras. I am very interested in the concept of creolisation developed by the philosopher and writer Edouard Glissant, according to which when two elements meet, a third, unpredictable one appears. It is in a way a transposition into art of human crossbreeding. Also, my paintings are collages, as much from a pictorial as a philosophical point of view. Symbols and images from different worlds are juxtaposed to form a patchwork of cultures. »