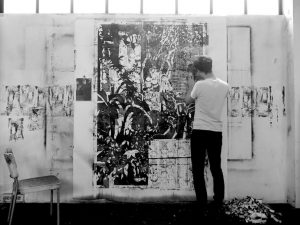 Through the diversity of artistic practices experimented with large formats, Maxime Duveau photographs places steeped in the history of Californian rock and influenced by Hollywood myths. The drawing reflects the memory power of certain places marked by human and cultural activity.

The artist seeks “to reconstruct kinds of syntheses that are a little abstract from what[he has] seen” while working on paper, making it almost alive. Thus scraping, crumpling and scrubbing are part of the creative process. Maxime Duveau’s drawing is a palimpsest, made up of successions and able to trace its own history as well as the landscapes that the artist redraws.