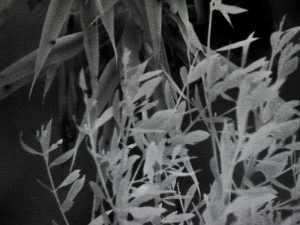 For the past years, Fabien Giraud and Raphaël Siboni have been working on a protean opus recounting a history of technology in reverse. This exhibition takes shape at the crossroads between the three cycles of works that compose it, reflecting on the recently completed first season The Unmanned, a history of computation in eight films, and prefiguring the trajectories of further seasons, which articulate narratives of value and negativity. The Everted Capital, a new cycle of works, debuts here with a 24h film that interrogates interrogating models of accumulation between ancient and future economies, the reciprocal consolidation between what is held to be valuable and invaluable at different historical junctures.

A visual database introduces the project The Form of Not, drawing equally on algorithmic calculus and anthropological diagrams to compute the shape of the “first blade,” around whose fabrication and use the inaugural event of a “first cut” would have taken place. A further sculptural component of the project subjects a prosthetic element employed in the artists’ film 1953 – The Outlawed to a series of formal and material permutations via which the relations between mask, the visage that it covers and the clandestine identity it projects recode the history of sculpture—or rather its Pygmalion complex—as a ritual oscillation between breathing life and death into forms, as a continuous sequence of animation and petrification. 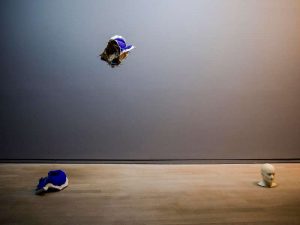 1953 – The Outlawed, only episode from The Unmanned presented at Fondation Ricard, centers on the last part of Alan Turing’s life, enduring an enforced hormonal treatment and undertaking morphological explorations in Greece. It visualizes “the cut” as a reversed form, as the convulsed boundary at which politics and bodies, edicts and transgressions, natural and technological becomings, intersect. The cut is the copula allowing them to maintain a semblance of separation and through which they are agonically hybridized.

The guide of the exhibition can be consulted on the website of the Foundation.