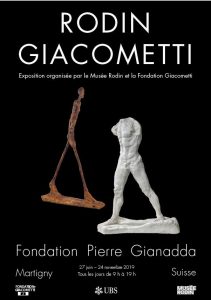 The result of a partnership between the Giacometti Foundation and the Rodin Museum, both located in Paris, and created from their magnificent collections, the “Rodin-Giacometti” exhibition is the first to highlight the connections between the works of these two geniuses. Born in Paris in 1840 and died in 1917, Auguste Rodin, one of the fathers of modern sculpture, revolutionized this art through his great freedom in formal treatment. Despite his references to ancient statuary and mythology, he defied academism. Swiss sculptor and painter, born in 1901 and died in 1966, Alberto Giacometti spent his life stripping his creations to the point of giving them a universal character.

Presented according to thematic axes, the exhibition highlights the similarities between these two magisterial worlds. Rodin’s vigorous modeling shows the work of clay under the bronze, while Giacometti’s acquires its singularity in his stretched and filiform characters after the war. For both sculptors, the repetition of the same motif characterizes the model’s approach and testifies to a tireless search for accuracy. While the unprecedented use of the accident appears to be one of Rodin’s major contributions, the broken figures preserved by Giacometti reveal how much each “hazard” is an integral part of his creative process. Sometimes deliberately distorted, Rodin’s works result in incredible expressiveness, while Giacometti’s stretch according to his very personal conception. The groups find themselves in their two microcosms, revealing in Rodin a manifest expressive power, while in the immediate post-war period, Giacometti offers us a fleeting vision of moving figures that reflects the solitude inherent in the human condition. Essential in the history of modern sculpture, the base is part of the sublimation of the works. Interested by his role, the two artists each time study the plastic possibilities. Finally, both fed by the art of the past at a very young age, they created a universal silhouette, “The Walking Man”, in 1907 for Rodin and in 1960 for Giacometti, a metaphor for our spiritual quests and aspirations.

This exhibition aims to establish, in a new way, a dialogue between the creations of two sculptors, beyond periods and styles. It thus offers visitors an original experience and, through the perspective of these two crossed worlds, invites them to consider them with a fresh perspective and provides them with valuable keys to understanding the innovative artistic approaches that underlie them.