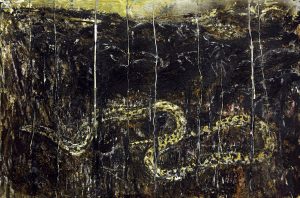 Contemporary Aboriginal artists meet their counterparts from the international scene for the new exhibition entitled RESONANCES, a dialogue between the collections of the two sisters Bérengère and Garance Primat. With more than 90 works by some 50 artists from around the world, it follows on from BEFORE TIME BEGAN, which presented the origins of contemporary Aboriginal art.

RESONANCES explores the fundamental theme of man’s place in the universe through a journey in five chapters. The walls are black, ochre and red: the tones of the Australian desert. The visitor’s first steps plunge him into the immemorial night, the time when the primordial Being is buried in the depths of the Earth. He discovers the Tales of Lands and Skies, then the Power of Metamorphosis. Then the Secrets of Mother Earth, the Origins are revealed, and finally the light of day bursts forth with the appearance of the Primordial Being.