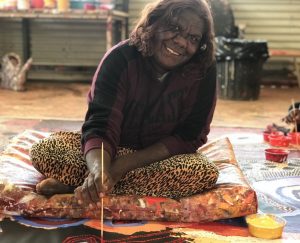 “Before Time Began”, a saying by Aboriginal artists which is often heard in Central Australia, has different levels of interpretation.

In the concept of the Dreaming, this phrase can be referred to in describing the process of Creation. The reference to “time” helps us understand a complex concept innate to Aboriginal culture whereby the Earth was created by the actions of our ancestors during the Dreaming.

From an art history perspective, the title evokes beginnings,
or the origin of contemporary Aboriginal art from a number of isolated regions.

The current art scene is represented by works from the APY Lands in which the meeting of contemporary and traditional art are seen simultaneously: ancestral knowledge combined with new societal developments are ever present.

Two major collaborative paintings as well as an installation of wooden spears, “kulata tjuta”, are the central pillars of this inspiring exhibition.