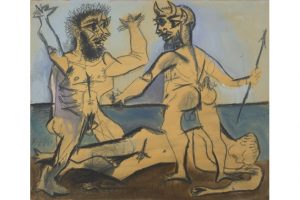 In 1962, the great Italian filmmaker Federico Fellini (1920-1993), got up one morning and described an encounter with Picasso in The Book of Dreams, a set of notebooks like an oneiric anthology, in which he drew and wrote about what he had dreamed, at the request of his psychoanalyst Ernst Bernhardt, a disciple of Carl Gustav Jung. Between November 1960 and August 1990, Federico Fellini filled two thick books with an extensive imagery composed of characters and pictures that were the source of some of the unforgettable scenes in his films.

Pablo Picasso was first depicted in a dream dated 22nd January, 1962, in which Fellini and his wife, Giuletta Masina, were visiting Picasso at his home, gathered in the kitchen in a cosy, friendly scene. In his memoirs, the director wrote that “we were in a kitchen – clearly the kitchen of his own home. It was an enormous kitchen, full of food, paintings, colours… We talked all night”.  Five years later, on 18th January, 1967, he again dreamed of Picasso, writing in his notebook: “All night with Picasso, who talked and talked… We were great friends, he was very kind to me, like an elder brother, an artistic father, a colleague who saw me on his own level, someone from the same family, the same stock…”. There was another dream in 1968 that Fellini did not draw but did write about, to do with fake news about Picasso’s death. Finally, in July 1980, Fellini described his fourth and final dream, in which he states that Picasso once again spoke to him as both a friend and a master: “I dreamed of Picasso (looking a little older and more shrunken, but still very lively), who talked to me non-stop”.