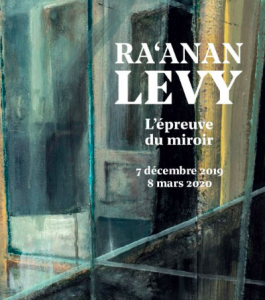 Between 7 December 2019 and 8 March 2020, the Fondation Maeght presents “L’épreuve du miroir” (“The Mirror Test”), an exhibition devoted to the pictorial world of Ra’anan Levy, in which curator Hervé Lancelin, a close friend of the artist and familiar with his work, assembles around thirty of Levy’s paintings and a number of his prints, which will be placed alongside the Fondation Maeght’s own collections.

The French-Israeli artist consistently depicts idiosyncratically chosen fragments of everyday reality, thereby asserting his personal style while exploring his favourite themes: the configuration of space, the passage of time, the absence of people, the presence of objects, inhabited and uninhabited spaces, the play of visual perception and imagination transforming everyday life into a strange new reality.

The principle that can be seen in Ra’anan Levy’s work, acting as its guiding thread, is AMBIGUITY. On one hand, the works that represent plenitude to the point of BULIMIA, such as work tables and studios full of useful or useless objects, or the paintings depicting libraries flooded with piles of books discarded in all directions. On the other, subjects that are practically ANOREXIC in their sparseness, such as empty rooms and apartments, or fragments of mirrors. The element that links such contrasting subjects is simple: if we look at the pots of paint on the work tables, we see that they are always open, inviting us to enter, like Alice entering wonderland, a labyrinth of empty rooms and mirrors. There is always an opening inviting the viewer to enter.

Guest curator: Hervé Lancelin, President of the Pinacothèque in Luxembourg.