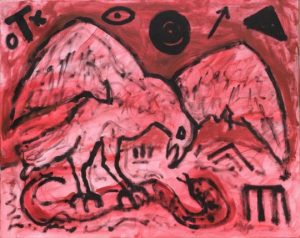 Ralf Winckler, better known under the name A.R. Penck, is one of the greatest German artists of the late twentieth century along with Georg Baselitz, Markus Lüpertz, Sigmar Polke and Jörg Immendorff. A.R. Penck was born in East Germany in Dresden and will be 78 years old at the opening of his exhibition at the Fondation Maeght. In 1980, he moved to the West, near Cologne. The criticism of the division of his country has been an influence on his work. A number of analyses and interviews have highlighted this aspect of his work.

The focus of the exhibition is on the challenges of his painting and sculpture through different periods chosen to give a better understanding of the richness of his aesthetic, existential, philosophical and literary worlds. The exhibition will present some one hundred paintings, sculptures, large sets of drawings, prints and artists’ books.

A.R. Penck has invented a colorful pictorial language expressing the rhythm of a constant back and forth between primitivism and “art brut”, between painting and graffiti of which he is one of the fathers along with Keith Haring and Jean-Michel Basquiat. His language aims to be the language of this humanity that he is trying to portray, by using calligraphic elements, through themes such as human alterity, the relationship to the animal or cosmic world or a dialogue between catastrophe and the jubilation of dance. All human history moves towards this creation of rhythmic spaces where living becomes possible. The exhibition attempts to explain this idea of A.R. Penck who, through painting, sculpture and drawing, shows the adventure of an artist who perceives his work as “the promise of space,” a space to discover, to explore, to inhabit.

The Fondation Maeght is especially pleased to present this exhibition which interacts with the legacies of Joan Miró and Alberto Giacometti which Penck makes reference to : with Miró, by a “swept away” drawing and the insistent presence of the cosmos and with Giacometti, by a synthetic humanity and timeless.