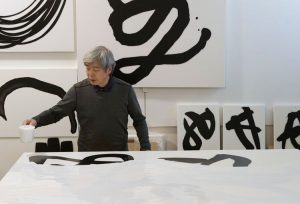 Under the curation of art critic Henri-François Debailleux, this exhibition highlights a body of work built around very subtle blends coming from Western abstract art such as Arte Povera and the codes and traditional artistic practices of Korean culture. With Lee Bae, the idea of nature is present through fire and charcoal but also through the symbolic and intangible black. The artist likes to emphasize that the burned wood and coal he uses come from the human hand and its ability to transform this natural material.

The black forms, the materials, the white backgrounds, the light and shadow, the density and transparency have been the vocabulary used by the artist since the beginning of his career to reveal an environment and an interior landscape where the forms, the space and the elements become the philosophical and poetic expression of a relationship with the world. Between the forms and the materials, temporality and the emergence of gesture, an attitude between body and nature, everything in Lee Bae’s work is the expression of vitality, strength and energy.

Born in 1956 in Chung-Do, South Korea, Lee Bae, who lives and works in Paris, is one of the greatest Korean artists of our time. With an international reputation, his work has been presented in Korea (Modern Art Museum of Seoul, Daegu Museum, Busan), China, the US and Europe. He has had personal exhibitions in France at the Musée Guimet in Paris (2011 and 2015), the Museum of Modern and Contemporary Art Saint-Etienne (2011), the Fernet-Branca Foundation in St. Louis (2014), Domaine Kerguéhennec in Bignan (2016) and the Château de Chaumont-sur-Loire (2016). His work can also be seen throughout the world, in different galleries such as the Gallery Hyundai (Seoul, South Korea), the Johyun Gallery (Busan, South Korea), Holly Hunt, White Box Gallery (New York) and in France at the Galerie RX and the Galerie Emmanuel Perrotin.