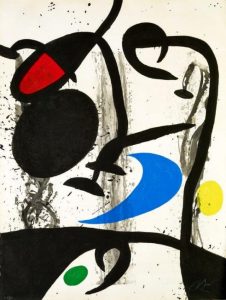 Building on the legacy of Marguerite and Aimé Maeght and their son Adrien, art publishers and printers, the Fondation Maeght pays tribute to the creative genius of Joan Miró for its major summer exhibition, ten years after the foundation’s last exhibition devoted to him, “Miró in his Garden”. The show also echoes the retrospective presented this winter at the Grand Palais in Paris. Born in 1893 in Barcelona and died in 1983 in Palma, Majorca, Joan Miró was one of the great 20th-century artists who revolutionized the codes of modern art. Throughout his life, the artist invented a dreamlike world to serve a vocabulary of forms applied to all the techniques he worked with. “I need a starting point,” explained Miró, “even if it is only a speck of dust or a beam of light. This form provides me with a series of things, each giving rise to the next. As such, a strand of thread can inspire a whole word.”

The Fondation Maeght exhibition “Joan Miró. Beyond painting.” reveals the evolution, scale and richness of Joan Miró’s graphic work through a layout focusing on four main concepts: Joan Miró’s relationships with poets, the concept of collage, combinatory possibilities and the discovery of techniques. “Joan Miró would describe himself as a painter, but he would make one thing clear: he was a painter, but a painter who wanted to express himself with all the techniques available to him,” explains Rosa Maria Malet, an expert in the artist’s work and director of the Fundació Joan Miró in Barcelona for 37 years. “The more I work, the more I want to work. I want to try my hand at sculpture, pottery, printing, have a press,” declared Miró.

The preparatory work presented by the Fondation Maeght reveals Joan Miró’s goal of using all the possibilities open to him. The exhibition pays tribute to a highly driven artist while explaining his working methods. At the ARTE print shop, founded by Adrien Maeght in 1964, the artist could experiment with all the techniques available, from the most primitive to the most innovative. Joan Miró wanted to try all the opportunities presented by traditional processes, as well as new systems such as scanners. He also printed on unusual materials such as sewing patterns, canvas and parchment. On Joan Miró’s behalf, Adrien Maeght and Henri Goetz developed the carborundum technique, which Miró immediately seized upon.

The relationship between artist and printer is of fundamental importance. It gave Joan Miró technical solutions to his questions and helped him achieve the results he wanted. These technical aspects of his graphic work (relief, materials, incorporation of objects, re-use of motifs, etc.) show their full importance and reflect the consistency of Miró’s work in the connections between his graphic work and his sculptures and ceramics.

Neither abstract nor figurative, Miró constantly developed a resolutely new, poetic language in both his painting and all his other modes of artistic expression, among which his graphic work remains a very important field: “Of all the areas explored by Miró (sculpture, stained glass, ceramics, tapestry, theatre, etc.), graphic work attracted him the most. The direct action of the artist on the copper or stone plate, the magical moment of seeing how the markings he had made were transferred to paper, the desire to achieve a kind of vibration with the inks… All the possibilities offered by print making and lithography were a challenge for Miró. This active interest, lasting until the end of his life, was the source of a remarkable production, in terms not just of quantity but, above all, of quality,” states Rosa Maria Malet.