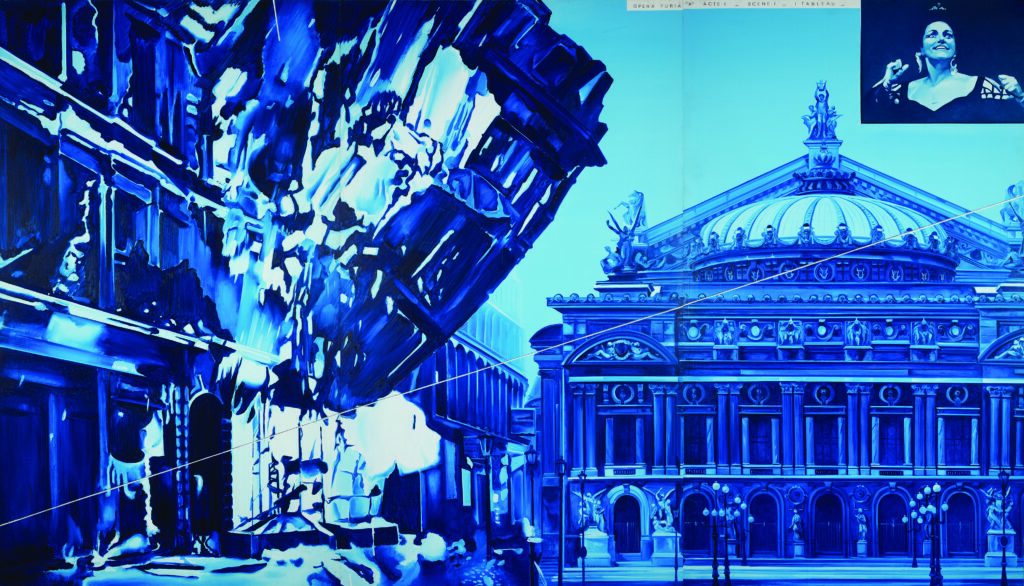 From 1 July to 22 November 2020, the Fondation Maeght is presenting the first monographic exhibition dedicated to Jacques Monory since his death in 2018, thus paying tribute to him. Simply entitled “Jacques Monory”, the exhibition presents sixty years of his career and revisits the work of this major Figuration Narrative artist, in constant tension between modernity and the singularity of the blue that made him famous. Organized by Laurence d’Ist, curator of the exhibition, this overview follows a non-chronological path that attempts, from one room to the next, to make the most of the echoes of and deviations from this singular work that deserves revisiting.

Out of all the Figuration Narrative painters, Monory was no doubt the only one to be fully narrative. Sometimes hyperrealist, the enigmatic scenes that he painted and juxtaposed to form a sort of haunted diary of a painter who questioned the world’s reality every day. The blue that made him famous, whether monochrome or with other colors in the spectrum, is the color of this doubt. It acts as a dreamlike veil and establishes a certain distance.

Borrowing from the cinema – and notably the thrillers of the 1950s – as well as from photography and imaging, Monory’s painting, frequently in large formats and often including objects, forms a sort of accelerated carrousel, sometimes with nearly ecstatic stasis: urban landscapes and wide expanses of nature, romantic visions and dramatic images from the news or contemporary history alternate with each other or come together. Fundamental pessimism, tinted with dark humor, coexists with a fascination for the void.

Monory does not give any lessons, he questions himself and he questions us: how do we live in a violent, unreasonable, illogical, surprising and often fake world? His painting, which reflects a modernity whose violence he conjures up by letting it run wild, comes back to us today like a slap upside the head, like a very long film from which we would like to be able to isolate each frame while letting ourselves get swept away by the power of his merciless editing.