Fondation Maeght: Eduardo Arroyo ‘In the Respect of Traditions’ 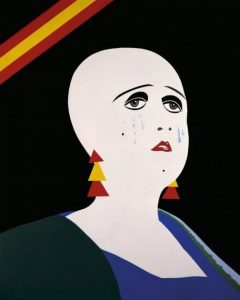 Today Eduardo Arroyo is regarded as one of the great Spanish painters of his generation. Born in 1937 in Madrid and attached to the current of the “Figuration narrative” that developed in Europe in the early 1960s, he painted humanity through images games, the origin of which lies as much in society as history, the history of art or literature. Eduardo Arroyo, who is also a writer, uses the narration fragment, with a sense of humor and taste for paradox. It results in a pictorial work extremely built and giving proof of a constant freedom. The exhibition of the Fondation Maeght indicates this bias, between the absurd and the ironic in its title: ‘In the respect of traditions’. In this year of the 80th anniversary of the artist, it will propose a thematic journey of works carried out since 1964 and is comprised of famous paintings such as unseen paintings, including a series of paintings made especially for this exhibition. It presents many drawings and a set of sculptures, including stone,

In this year of the 80th anniversary of the artist, it will propose a thematic journey of works carried out since 1964 and comprises famous paintings such as unseen paintings, including a series of paintings made especially for this exhibition. It presents many drawings and a set of sculptures, including modeled stones and assemblies, between fiction and reality, as this series of heads-hybrid Dante-Cyrano of Bergerac or of Tolstoy-Bécassine.

Spectacular by its diversity of materials, by the profusion of characters, by its range of colors, the exhibition stages some small theaters like the one around the table the Mystic Lamb of Hubert and Jan Van Eyck or the one that is collecting “vanities”, skulls and flies in the Court Miró.

“The painting is somehow literary, and it is in this sense that I’m working on themes. There is a beginning, an end, characters, and the ambiguity in the novels. So it’s a narrative as if I had written a couple of novels… “, explains Eduardo Arroyo.

As an engaged artist, Eduardo Arroyo refuses any complacent aestheticisation of art and defends the exemplary nature of the work, the strength of the image. He wants his painting to be accessible to the greatest number. His paintings are painted in flat areas, but he also frequently uses collage. The exposition also includes sculptures for which he uses clay, iron, stone, plaster and bronze.

The use of the “nonsense” of the absurd, actually a direct heir of Lewis Caroll and Francis Picabia.