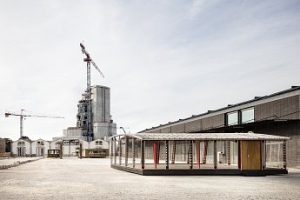 As part of its guest program, the LUMA Foundation, together with Paris-based Galerie Patrick Seguin, is pleased to announce JEAN PROUVÉ: Architect for Better Days, a major survey exhibition devoted to the innovative twentieth-century French designer of furniture and architecture. Comprising twelve prefabricated buildings created between 1939 and 1969, this exhibition features the largest number of Prouvé’s demountable construction systems ever assembled in a single location, and aims to revisit the functional side of his architecture, a focus that is as timely and relevant as ever in light of today’s housing and migratory crisis.

Following the installation of four houses at the Parc des Ateliers in Arles in May, the structures are installed within and in close proximity to La Grande Halle – an exhibition venue wrought from a nineteenth-century foundry—is a fitting tribute to Prouvé’s training as an artisan metalworker.

Jean Prouvé (1901-1984), regarded today as one of the most enduring and important figures of twentieth-century design, approached the construction of furniture in the same way he constructed a house. In order to describe this balance of material integrity, innovative and economical construction, and elemental design, Le Corbusier designated Prouvé a constructeur. At once an architect and an engineer, the term encompasses the singularity of Prouvé’s elegant approach as well as his vital social motivation, manufacturing “brilliant solutions” for the modern era’s most urgent needs. Though Prouvé is today synonymous with the bent sheet-steel frames of his now-iconic furniture, his seminal contributions to modern architecture and his socially engaged praxis as constructeur –united the realms of industry, architecture, engineering and design– deserve far more attention than they have historically been afforded.