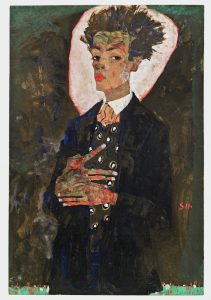 Egon Schiele’s work embodies the spirit of early 20th century Vienna. In just a few years, his drawing emerged as one of the peaks of expressionism. At odds with the Academy, which he entered at a very young age, he founded the Neukunstgruppe in 1909 and, thanks to Gustav Klimt, discovered the work of Van Gogh, Munch and Toorop.

From 1911, in relative isolation, he concentrated on his own work, which is fascinating for the distortion of bodies it depicts, the introspection, the frontal expression of desire and the tragic feeling of life. Before he was struck down by Spanish influenza in 1918, the artist had created some three hundred paintings and several thousand drawings over the course of just ten years.

As the first monograph of Schiele in Paris for 25 years, the exhibition includes works of the highest order, such as Self-Portrait with a Chinese Lantern (1912), on loan from the Leopold Museum (Vienna), Pregnant Woman and Death (1911), from the Národní gallery (Prague), Portrait of the Artist’s Wife Seated, Holding Her Right Leg (1917) from the Morgan Library & Museum (New York), Standing Nude with Blue Sheet (1914) from the Germanisches Nationalmuseum (Nuremberg), Seated Male Nude (1910) from the Neue Galerie New York, and Self-Portrait (1912) from the National Gallery of Art (Washington).

The exhibition brings together more than 100 works—drawings, gouaches, and paintings—over more than 600 m2, in the pool-level galleries (Gallery 1). It is organised chronologically across four rooms, following the concept of line and its development in the artist’s work. Dieter Buchhart, curator of the exhibition, explains his choice in this way: “Very few artists have approached line and drawing with the same virtuosity and intensity as Schiele. […] By evolving from the ornamental line towards the expressionist line, combined, in three dimensions, fragmented and amputated, he enabled a borderline dissonant and divergent experience of the line as a sign of human existence.”

The Ornamental Line brings together works inspired by the Jugendstil, full of fluidity, which makes reference to the discovery of the work of Gustav Klimt, who played a major role in his development.

The Expressionist Line highlights the artist’s most expressionist works and his angular and contorted portraits and self-portraits, which are sensual and vibrant, enlivened by touches of pure colour.

The search for equilibrium, from the years before the first global conflict, conveys the premonitory fear of war. This group of work was created at the same time, or immediately after, the artist’s brief period of imprisonment in 1912 in Neulenbach, following accusations of indecency. It is characterised by a less sinuous line and a flatness of drawing which partially frees itself from the former dissonance.

The fragmented and recombined line denotes a significant change: the introduction of formation in the representations of the body. The bodily postures are also more familiar, less aggressive.

The exhibition Egon Schiele will be held at the same time as an exhibition of works by Jean-Michel Basquiat. Both shows are curated by Dieter Buchhart with Suzanne Pagé, Artistic Director of the Fondation Louis Vuitton.

From opposite ends of the 20th century, from Europe—Vienna—to America—New York—the lives and works of Egon Schiele and Jean-Michel Basquiat are fascinating for their fleetingness and their intensity. Both died at a very young age—28 for Schiele and 27 for Basquiat.

In under a decade, they became major figures in the art of their century. They are linked by their destiny and their fortune, that of a short-lived body of work, the impact and permanency of which have few equals. Their formidable output can be explained by their passion for life which today, in the 21st century, has made them real “icons” for new generations.

The vital necessity of art is the main element in these two exceptional bodies of work.