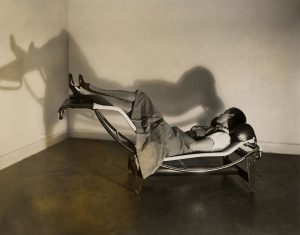 20 years after the death of Charlotte Perriand, the Fondation Louis Vuitton is celebrating the visionary creator with an exceptional exhibition. This event highlights the links between her design, architecture and artworks.

For the first time since its opening in 2014, the Fondation Louise Vuitton is dedicating the entire Frank Gehry building to a single designer, Charlotte Perriand (1903-1999). From the 1920s to the beginning of the 21st century, Charlotte Perriand’s work and life reflect an extraordinary, free and independent career. While she is best known for her contributions to the field of design, Charlotte Perriand did not hesitate to cross the boundaries between artistic and intellectual disciplines.

An Independent, sporty and a well-travelled woman, Perriand was attentive to nature and to the environment. Open to cultural dialogues, she was socially, artistically and politically active on a daily basis. Using a multitude of artistic materials—from chrome tubes to a straw, raw wood, bamboo, prefabricated elements and polyester—she combined design, architecture, urban planning, crafts and fine arts without ever neglecting the humanistic and economic aspects of her creations.

Dedicating all its galleries to Charlotte Perriand, the Fondation Louis Vuitton presents her lifetime achievements and the links she forged with the greatest artists of her time. The “art of living,” that she herself put into words and space, cannot be perceived without the apprehension of the works that accompanied her gaze.

Chronologically laid out and spread across four levels, the proposed route combines her work with that of her close friends, going as far as to immerse the spectator into historical reconstructions: the apartment-cum-studio on Place Saint-Sulpice (1927), the Salon d’Automne (1929), the Maison du Jeune Homme (1935), the Maison au bord de l’eau (1934), the Refuge Tonneau (1938) and the Maison de thé for UNESCO (1993).

From the very beginning, between 1927 and 1929, Charlotte Perriand reinvents housing (Gallery 1), notably by collaborating with Le Corbusier and Pierre Jeanneret. The 1930s (Gallery 1) are the scene of her political, social and artistic engagement, often alongside Fernand Léger. It is also with the latter that, aware of the limits of progress and technology, she imagines a “raw art” inspired by nature (Gallery 2).

Her crucial stay in Japan (Gallery 4) from 1940 to 1941 reinforces her understanding of the links between creation and tradition and it initiated one of the central contributions of her work, the dialogue among cultures.

Returning to France, she actively participates in the Reconstruction (gallery 4). She co-founds the movement “useful forms,” which would play an essential role in the emergence of Design during the Glorious ’30s.

In Tokyo in 1955, she proposed a “Synthesis of the Arts” (Gallery 5) and presented, alongside her own works, those of Le Corbusier and Fernard Léger. In Paris, Galerie Steph Simon (Gallery 6) showcases her pieces of furniture and her “art of living.” Her stay in Rio at the beginning of the 1960s (gallery 7) allowed her to further enrich her imagination.

In Gallery 9, Charlotte Perriand’s works communicates with those of Robert Delauney, Simon Hantaï, Alexander Calder, Pablo Picasso, Henri Laurens and Fernand Léger in places thought of by her to understand and exhibit Art.

Her love of the mountains (Galleries 8 and 10) is also reflected in several of her creations, from the ‘Refuge Tonneau’ to the ski resort of Les Arcs in Savoie. Finally, it is the intimate relationship that she established with Japan that concludes this itinerary: the Maison de Thé (1993), created for UNESCO, is rebuilt in Gallery 11, echoing the architecture of Frank Gehry.