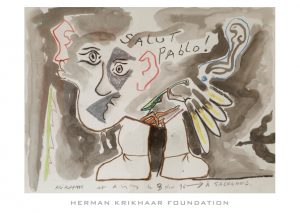 In the exposition of works by André Villers (1930-2015) and Herman Krikhaar (1930-2010), which celebrates the first ten years of the Herman Krikhaar Foundation, everything revolves around friendship: ‘l’Amitié’

Friendship between artists grew into something bigger if you had the chance to meet André Villers, who always loved to provoke collaborations with artists, like he has done with Herman Krikhaar, but also with Karel Appel: les oeuvrés croisée, as they so rightly put it in french. More tokens of friendship are present in the exhibition: with the CoBrA artists as Appel, Corneille, Constant and Rooskens but also of others from Hermans wide range of friends, like Ossipe Zadkine.

Also André Villers last series of work is shown here. It comes directly from Gagosian’s gallery in Geneva, where they made this homage to Picasso and Villers. This series is the imminent prove that photography goes way beyond the direct catching of an image. Already in the sixties while working together with Picasso on the famous series ‘Diurnes’ Villers was working on this belief.