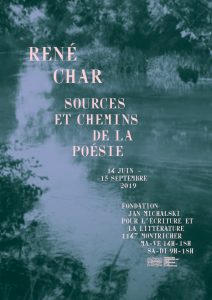 René Char (1907‐1988) was a major figure of 20th century poetry. His early work was akin to surrealism but in 1948 he published the collection Fureur et mystère, which brought together texts that are stamped by World War II and his service in the French Resistance. His later work invites us to discover yet another dimension of his poetry, his relationship to space and sensitivity to the land – from the microcosm of the vallis clausa, or “closed valley,” to the cosmos. The poet’s long walks in the Vaucluse, his native “land,” and his attention to a setting whose profound mystery he intuited and fragility he sensed, constantly fed his inspiration while shaping a language that tightly coils in the poetic image the happy or painful experiences of a man as well as his deep gratitude toward the natural world.

René Char | Sources et chemins de la poésie (René Char | The Wellsprings and Ways of Poetry) follows the poet over the course of some thirty years, from Le soleil des eaux (1949) and Les matinaux (1950), to the collections La nuit talismanique (1972) and Aromates chasseurs (1975). The show is divided into four chronological sections that are organized around the works and their manuscripts, as well as photographs, prints, drawings, and fragments that led to the birth of complete poems. It also brings to life the places where Char lived, while several rare books reveal the poet’s friendships and dialogues with contemporary artists like Maria Helena Vieira da Silva, Joan Miró, Georges Braque, Victor Brauner, Pierre Charbonnier, and Louis Fernández.